Glory Be! creator joins Who actors for Harlow Sci-Fi weekend 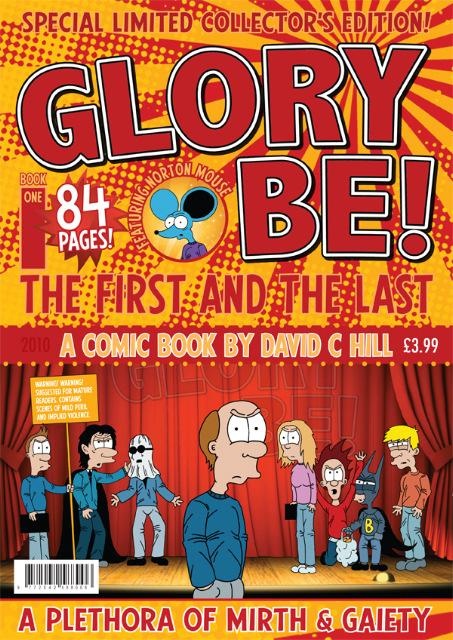 Writer and artist David C Hill will be attending the renowned Comic Book & Sci-Fi Weekend at the Harvey Centre in Harlow, Essex to sign copies of his esteemed yet off-beat comic, Glory Be! – and is offering fans the chance to grab an exclusive ‘Norton Mouse’ mini-comic.

The bank holiday weekend also kick-starts a fantastic new competition, open to every reader who purchases a copy of the comic between 1st May and 1st July 2010 (either at the event or via the website). By answering the set question correctly, one lucky winner will be immortalised in comic book form and featured as a guest character in the next issue of Glory Be! - "an accolade that money just can’t buy," say the publishers

Glory Be! is an 84 page full-colour comic book set within the fictional community of Riverdale Church. Not a traditional comic per se it is, for the most part, a series of extraordinarily random "off-the-wall" email exchanges between a charismatic church pastor and his Machiavellian band of troubled sheep.

Albeit that there is a clear Christian premise within the story, Glory Be! is designed to appeal as much to non-believers as to avid church-goers.

Taken from the main Glory Be! comic, Norton Mouse is a particularly popular character with his own fansite and ever-spiralling fan base on Facebook and Twitter. Followers include television legend Jonathan Ross, Peter Serafinowicz and he natters with Christine Hamilton, Murray Gold and Josie D’Arby – to name a few.

The Comic Book & Sci-Fi Weekend, hosted by 3 Darths Comics and Collectables, is the second comic book and SF weekend in the Harvey Centre, with a host of special guests and events line up. Visitors can collect a free comic and meet the Stormtroopers from the UK Garrison who will be on hand to meet and greet Star Wars fans and will be collecting for their nominated charity NSPCC.

As well as David, other guests at the Bank Holiday weekend event include (subject to work commitments): Sixth Doctor Colin Baker, from Doctor Who; Warwick Davis (Wicket the Ewok in Star Wars VI: The Return of the Jedi and Professor Flitwick in the Harry Potter films); R2D2 actor Kenny Baker; Scott Capurro (Beed’ in Star Wars Episode 1: The Phantom Menace); plus Tim Rose, Mike Edmonds and Nick Briggs, who supply the voices of the Daleks, Cybermen and other monsters in Doctor Who, Torchwood and The Sarah Jane Adventures.