Now in its third year, Dundee University's comics conference has become established as a regular part of the British comics year and both the number and the recognition factor of the comics creators who attend has increased year on year. Under the auspices of the Dundee Literary Festival, this year's Sunday conference had the theme of how comics both deal with, and subvert, the passage of time within their stories.

Prefaced by a morning workshop on writing for graphic novels by ex-2000AD editor David Bishop, the main conference began after lunch with an introduction by organiser Dr Chris Murray of the university's English department. After the pink Hawaiian shirt that he sported at the Beano celebration last year, Chris' shirt this time was a more ecological themed lime green. It is worth reiterating that Timeframes was set in a university and billed as a conference rather than a convention and so the first two speakers were academics with what was, to many in the audience, an over analysis of how time passes between the panels of a comic strip and how Neil Gaiman and Dave McKean used time in both the real and fictional worlds in the graphic novel of Signal To Noise. 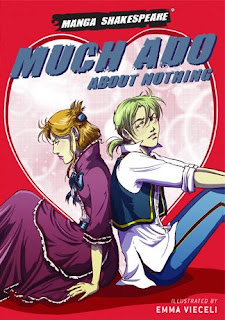 The dryness of the initial two topics was brought into sharp perspective with the first talk by a comics creator. Manga Shakespeare artist Emma Vieceli bounded to the front of the lecture theatre in an explosion of enthusiasm that lifted the mood of the room considerably. Looking for all the world like a Manga character herself, with her long hair and black and white outfit, she took the audience through her adaptation of Much Ado About Nothing showing the real Italian locations that she had used as well as her more unusual graphical trickery to illustrate parts of the narrative. Borders, who were running the bookstall in the reception area, definitely missed out here as they did not have any copies of Much Ado About Nothing of sale on their stall which would have sold well for them based on the first enthusiastic applause of the day from the audience. The final speaker of the first section was Dr Mel Gibson, who regularly gives talks to non-academic audiences, covered how Bryan Talbot dealt with different time periods and the story-within-a-story concepts of Alice In Sunderland. While the earlier talk didn't inspire me to read Signal To Noise this did make me want to return to Talbot's book and the number of people looking at it on the bookstall afterwards suggested that I was not alone.
The break after this allowed for free refreshments before the audience moved upstairs to the Lamb Gallery where the exhibition of artwork from DC Thomson's Starblazer digest was formally opened. Starblazer editor Bill McLoughlin gave the attendees a gallery talk as he walked around the exhibits pointing out details and relating tales of his time on the title. Also at the gallery talk were artists Ian Kennedy, Keith Robson and Colin MacNeil with cover artists Kennedy and Robson each getting a wall of the gallery devoted to their work while one of MacNeil's covers had been blown up into an enormous poster sized print. This free exhibition is now open to the public until 22 August 2009. 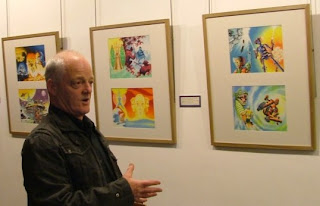 The second selection of talks began with editor Bill McLoughlin and artist Keith Robson talking about their work at DC Thomsons in general and on the Starblazer title in particular with some good natured needling of each other over the differences between editorial and artistic concepts of the same idea. As much as they did overrun their time slot, I could have listened to much more of this. Next up was academic Peter Hughes Jachimiack with a presentation given the less than riveting title of "Days Of Future Passed: A 1970s Britain, Economic Downturn An Utopian Futures In Children's Science Fiction Comics". This actually turned out to be an interesting overview of Starlord comic with an emphasis on Ro-busters and in particular the Lep-R rocket/Midpoint Tower collision story, as illustrated by Ian Kennedy, with its 9/11 overtones. Next up was ex-Tharg David Bishop, a university lecturer himself nowadays, with an entertaining look at how Alan Moore dealt with the concept of time in two different 2000AD Future Shocks and the final Halo Jones story. Artist Gary Erskine came next with a heavily illustrated talk on his work on the Virgin Dan Dare series from concept to completion emphasising writer Garth Ennis' attention to visual detail on his designs. A short presentation from Insomnia's Cameron Coutts on the Edinburgh company's current and forthcoming range of graphic novels completed the session.
After more refreshments and a popular signing session from all the professionals still in attendance, the conference moved into its final section with its two keynote speakers. Writer Alan Grant had originally been intending to talk about his career in comics but had been inspired by the academic nature of the event to instead change his theme to his thoughts on the current state of comics aimed at primary school age children. Emphasising the general lack of stories in the titles and the blandness of those that were included, he ranged from Barbie to biblical Armageddon making the point that children just are not interested in bland stories. The conference concluded with a short talk from writer Warren Ellis which had been, if his blog is to be believed, written earlier that day and fuelled by Red Bull and cigarettes. With Ellis seated comfortably at the theatre's microphone he concluded with a long Q&A session allowing the audience more of an interactive opportunity with him than with any of the other guests. 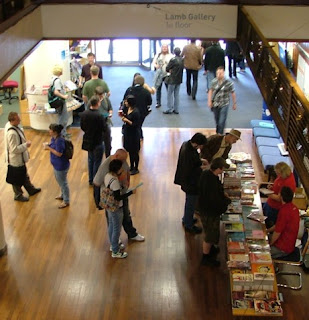 With other literary and book festivals regularly charging upwards of £9 per guest talk, at £10 for the entire day, plus refreshments during each break, Timeframes was an absolute bargain. The university theatre was well equipped and spacious, if a little warm at times, and the reception area outside, with its good selection of graphic novels and comics related books for sale, allowed for socialising between sessions. In addition, with most guests taking the opportunity to chat in the reception area during the breaks, the day had a friendly feel which is what organiser Chris Murray was aiming for.
That said, the extant dichotomy between the erudition quest emanating from the divergent knowledge levels of the independent researchers present and the referential requirements of academic study may always prove to be a cause of concern prior to each Dundee event, treading as it does the fine line in its temporal ratio of conference vs convention, so the event chairs should remain aware that the interest length of the non-academics present will show an inverse ratio to the sentence density of dictionary level words used during the presentation of academic papers.
In other words, as long as the academic presenters remember that they are not presenting to a university level peer review but to a general albeit attentive and knowledgeable audience and that an illustrated conversational style is therefore preferable to reading from sheets of A4 with too many long words and too few full stops, then Dundee will remain as it was this year, an interesting as well as an unique part of the comics events diary.
Posted by Jeremy Briggs at 7:40 pm