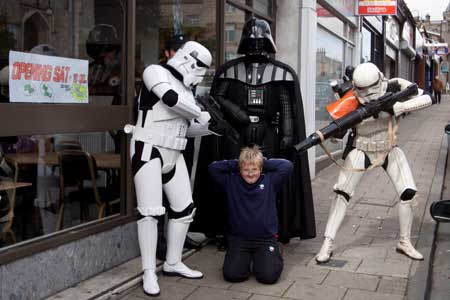 In these downbeat times, it's rare to have something to celebrate - especially the opening of a new comic shop. But that's exactly what's just happened north of the border.

Kingdom of Adventure, which opened complete with a visit from Darth Vader and Stormtroopers on 20th June, intends to offer comic and games fans across Fife the chance not just to buy comics and games -- but play the games on show as well. And not in any small way: while game areas are nothing new in specialist stores, KOA is spread over two storeys and is fully kitted out to deal with up to 40 players at any one time.

The store will also be running classes including sessions on how to play the games on sale and others on how to paint the miniatures used to play them.

"Up until now Fife comics and games fans have had to travel to Edinburgh and Dundee or further to get the latest range of products, services and knowledge that Kingdom of Adventure will offer," says Dave. "Now they will have one of the best stocked shops of its kind in Scotland on their doorstep."

Despite the economic downturn and the closure of comic shops elsewhere in the UK, Dave believes that Fife is the ideal location for Kingdom of Adventure this nee store.

"Fife has a thriving comics and games community and Kirkcaldy feels like the ideal location for this new kind of shop. Plus, we’re a first in Scotland – offering the comics and games with plenty of space to play them in. 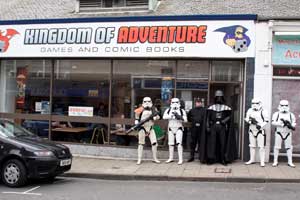 “I’m really hoping that the shop can play a big role in the Fife community," he continues. "I've ran games clubs in Edinburgh so I know that the facilities that we offer are in demand.

"I’ve already had a phenomenal response in talking to people about the shop, so I’m hopeful that people will come along and see what we have," he reveals enthusiastically. "There’s a huge demand out there."

Expect various events to be part of the store's schedule in coming months. "As well as the day to day running of Kingdom of Adventure, I'm also in talks with various comic and gaming industry celebrities about having signings and other special events," says Dave. "We've already had a special guest for the launch with Dungeons & Dragons writer Keith Baker in the shop running games and chatting with fans."

For Dave, the new venture is more than just a commercial venture he's been planning for years.

“I live and breathe comics and games," he says, "and I can’t wait to get started turning my hobby into my business.”