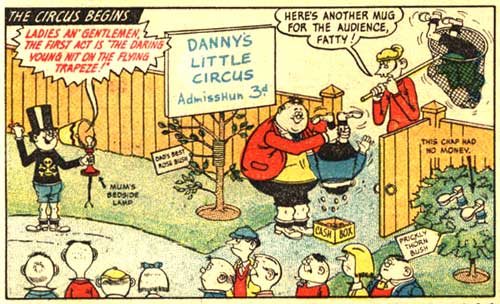 • (via FPI): Leo Baxendale features in The Times today, recalling the early 1950s and his first approaches to DC Thomson, them taking on Little Plum, Minnie the Minx then the immortal Bash Street Kids. More details and links over on Forbidden Planet International's blog, or jump straight over to The Times. Talking of Leo, his next volume of memoirs, Hobgoblin Wars, is due fairly soon.

• Big Finish have announced that Simon Guerrier's book, Bernice Summerfield - The Inside Story, will be out in August. The book is a warts-and-all guide to the character first created for Virgin's Doctor Who New Adventures by Paul Cornell, but who quickly grew to feature in the Doctor Who Magazine comic strip and get brought to life by Big Finish in several audio adventures, voiced by actress Lisa Bowerman. More info here on the Big Finish web site.

• (via Bear Alley): The latest Eagle Times (Volume 22 Issue 2, Summer 2009) continues a run of excellent issues with more of the same. The cover story is a look at the nature artwork of Tom Adams, nowadays best known for his covers for Agatha Christie novels but who has had quite a diverse career over the past sixty years. Other features include looks at the Dan Dare stories Operation Saturn and The Man from Nowhere, Eagle Autographs, Rex Keene (the first in a new series of 'Rivals of Jeff Arnold'), the third part of a look at Heros the Spartan, a P.C. 49 text story, pop music in 1965 and a look at Eagle Holidays.
Subscriptions are £22 (overseas £34 in UK pounds) for four issues a year from Keith Howard, 25A Station Road, Harrow, Middlesex HA1 2UA. More info at: eagle-times.blogspot.com

• Congratulations to Neil Gaiman, who has picked up yet another award for his novel, The Graveyard Book, this time the 2009 Locus Award for Best Young Adult Book.

• A new web portal, Talenthouse launches today, aggregating the works of artists from multiple disciplines including music, fashion, fine art, graphic design, film and photography.
Based in California, the site is the brainchild of British recording artists Amos Pizzey and run by CEO Roman Scharf. It allows artists to build their own profiles for free to display their work in full screen mode, gather followers and alert friends when new work is posted.
Cynopsis Digital reports the site's business model includes selling subscriptions to its database to TV and film studios and talent agencies (like the Amazon-owned IMDBPro), as well as launching brand-triggered creative competitions to source the community for new designs (sort of a multidisciplinary Filmaka)

• Bloggers and other writers may be interested to know Google-owned YouTube has launched its own portal to help instruct citizen journalists about how to practice better reporting. YouTube's Reporter's Center features house-made videos, clips from seasoned Pros from Dover including Katie Couric and Bob Woodward and practical shooting tips from sources such as Howcast. Check it out at www.youtube.com/reporterscenter