Hard Lessons in Self Publishing 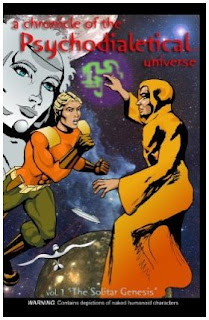 How many people publishing their own comics have posed themselves the question "If only I knew when I started my web comic what I know now"?

Well, Andrew John Standish, creator of the web comic Psychodialetical, certainly has. But if he thought producing a web comic was hard, then getting his first print collection A Chronicle of the Psychodialetical Universe, now available through bookshops and online stores, was also a bit of an eye-opener.

Andrew has started blogging about the experience on the downthetubes forum and with his permission, we're re-publishing an edited version of his first posts on his experience here...

Talk about a learning curve! Getting my first collection of Psychodialetical has certainly been one, but on the plus side, I'm having a blast telling the story, which far outweigh the problems encountered. The project wasn't helped by some basic errors on my part when it came to preparing the comics for print...

My first mistake was deleting all my original finished files to save computer memory. Wrong! I should have kept those higher resolution files as that's what you need to create print quality work. Then, I worked at low resolution for display on the web. Wrong! When you're working on any comic, always work in the highest resolution your system is comfortable with (no less than 300dpi), then save those high res files. Then re-save a copy of your work at web resolution (72dpi) for any web comic edition. (There's more about the differences here on Suite 101)

My third mistake, compounding the first two, was believing that the on screen display shows accurate image of printed page. Wrong!

If I was to publish a print edition of my comic, I needed to find some workarounds. First, I had to collect and save all the finished pages posted online, and increase dpi to 300 and resize. Anyone who's tried this will tell you it's no easy task: re-sizing doesn't replace vital information that's no longer there, the added detail vital for print. I had to carefully re-touch every single image, ensuring lettering was within "safe area" for IndyPlanet's Print on Demand requirements; and add "bleed" to the edge of the pages.

Finally, I had to print out the finished pages and examine for tonal inconsistency and clarity, etc. (There was also the matter of overcoming the limitaion of working in Photoshop Elements (it only saves as RGB, most printers rightly recommend CMYK) and, because I don't have a design tablet to draw on, everything had to be done via the mouse. My solution to the first limitation was to find a printer that would accept RGB files (although it may have been simpler to find a free program to convert to the more acceptable format, but since all interior pages are black and white it didn't seem worth it). 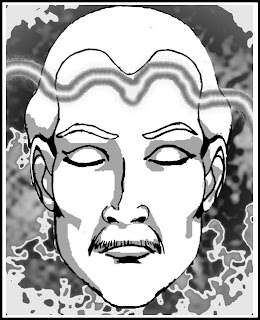 The solution to the second limitation - the lack of a tablet - was simply a case of gritting my teeth and getting on with it: a very time consuming process.

So that's the way not to prepare your first printed work. Better preparation (more thought before action) and cash outlay (on software/hardware) may have speeded up and simplified the process. But, in spite of this, I'm quite pleased with the results.

Getting the Book "Out There"

Having finally navigated through the technical aspects of printing and distribution I've now managed to make Volume 1 of A Chronicle of the Psychodialetical Universe available through bookshops and online stores. But even here, there have been a few hitches along the way, in their own way as frustrating as the problems I experienced preparing to make the leap from web version to print edition.

The biggest problem was getting an accurate listing on Pub Web, the basic industry tool to provide information to booksellers. It's free if you have an ISBN allocation (the coding that gives every published book its unique identity) but only allows the cover art, title, price, genre, ISBN, distributor and author name to be shown. If you want an author biography and synopsis, you have to pay to join the enhanced listing service.

My problem was that it wasn't allowing me to edit the listing to show the revised price and publication date, so WH Smith and various other stores are showing a higher retail price and later publication date than is accurate. Also the cover art, which I had to add later (the ISBN authority Nielson lists your first publication for you and you have to amend their listing when your Pub Web membership details come through), was missing.

Luckily, Pub Web sends out their data base to the book trade monthly, so these inaccuracies will be amended when the stores load in the new database next month. I'll not get caught out next time though because from now on I have the facility to load new title information myself.

I guess it's a blessing that the shelf life of a book is longer than the single month of a traditional comic-book, or these errors would have been fatal.

The next step is to get the message out to folks that the book is ready and available. It's still early days but I've done a few ads with Google and a couple on Facebook, one ad links to the books Facebook fan page, one to its Amazon sales page and one focused on the American market, to the IndyPlanet print on demand edition's page. The ads were relatively inexpensive and even if they don't result in direct sales at least publicises the work.

I'm also working on a competition for the Facebook fan page with prizes of merchandise from the Psychodialetical shop and eventually I'll get around to focusing on the traditional comic-book fan market... that'll be phase two!

I'm seeing this property as a long term commitment and the more I write about the Psychodialetical Universe the more it reveals to me it's wonders and mysteries, there are lots of stories to tell and I'm having a blast telling them!

• downthetubes recommends How to Make WebComics which, besides offering great advice about making web comics (it's by Brad Guigar, Dave Kellett, Scott Kurtz and Kris Straub) also has plenty of info on what size to save images etc for print. It's available from amazon.co.uk
Posted by John Freeman at 3:42 pm

Nice one! Yes, losing the original files is pretty disastrous. I did it once on an older comic, and decided to give up on the print version.

Kudos for sticking to it regardless.