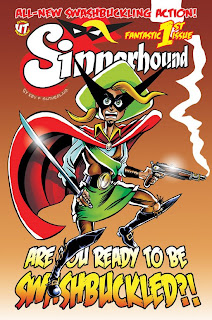 • There's a lengthy Pat Mills interview and appreciation in UK magazine Death Ray (issue #12, cover dated June 2008, Katee Sackhoff on the cover), co-creator of 2000AD and writer of strips such as Slaine and Nemesis the Warlock. However, Doctor Who is unapologetically the main attraction, celebrating its glorious return to the small screen with an issue packed with pages about your favourite Time Lord including interviews with Partners in Crime director James Strong, outgoing producer Phil Collinson, and old hand Terrance Dicks, who's still scribbling away with the Doctor's further adventures in print.

• Beano artist and writer Kev Sutherland is publishing a new comic, Sinnerhound, which should be available soon. "I'm doing a short run of 50, as much to test the water and use as samples as anything else," he says. "I'm still sussing out the best way to sell it online, and aiming to launch it properly, hopefully with a sister title, in Birmingham [at the Birmingham International Comics Festival] in October." Kev is also on tour soon with the Sock Puppet theatre -- more details on his web site.

• Talking of new comics, Tim Perkins long-gestating Wizard's Keep project is now at ashcan stage. "It's getting some rave reviews," Tim reports, "and hopefully bodes well for the release of the graphic novel next year for me. So I'm very happy with how things are moving along at the moment." Check a page of it out here, sans lettering: and the Ashcan cover art with inks by Joe Rubinstein here

• Talking of events, Bryan Talbot reports he'll be with Paul Gravett and Hannah Berry at the Ipswich Literary Festival 6.30pm Tuesday 1st July, and with Alan Grant and Hannah Berry at the Edinburgh International Book Festival on Friday 22nd August (which we've already mentioned a couple of times). There's also the whole "comic day" of the Dundee Literary Festival on Sunday 22 June, where Bryan will also be present, along with Paul Gravett, Ilya, Metaphrog and others.

• And finally, if anyone thinks the life of a comic creator is all convention stardom and kudos, remember everyone has to start somewhere. Over on Dez Skinn's Quality Comms Yahoo Group Bryan Talbot reveals one of writing super star Alan Moore's first jobs was cleaning toilets...
Posted by John Freeman at 9:03 am