New Hammer and Carry On stamps from Royal Mail 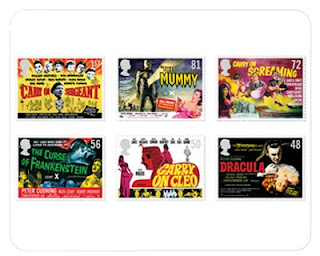 2008 is the fiftieth anniversay of both Hammer's classic Dracula movie and the Carry On films (although in the case of the latter you'd be forgiven for not knowing that giving the lack of fanfare over such a milestone!).

To celebrate these landmark anniversaries, on 10 June the Royal Mail are releasing a scrumptious set of stamps featuring poster art from Carry On Sergeant (which featured Doctor Who actor William Hartnell), Carry On Cleo and Carry On Screaming (which both included Jon Pertwee in the cast), The Curse of Frankenstein, Dracula and The Mummy.

These three Hammer films all starred another Doctor Who in the form of Peter Cushing. The presentation pack includes notes from sci-fi/movie expert Kim Newman.

• See the stamps and order them at www.royalmail.com
Posted by Ian Wheeler at 9:58 am