(with thanks to Reuben Wilmott) A radio adaptation of Peter O'Donnell's Modesty Blaise story A Taste for Death novel airs on BBC Radio 4 this week.

Starring Daphne Alexander - who was given a Modesty makeover for the serial's PR shots, above - the drama airs Monday to Friday in the 10:45/7:45 drama slot (see http://t.co/c1usOOcV), with an omnibus on Radio 4 Extra on Saturday (http://t.co/zabH4unn) 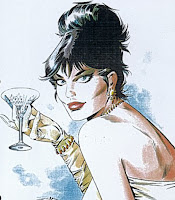 Modesty first started life in 1963 as a strip cartoon in the London Evening Standard - the first of the novels followed three years later.

Glamorous, intelligent, rich and very, very cool, Modesty Blaise has been called the female James Bond but she's much more interesting than that. With her expertise in martial arts and unusual weapons, the ability to speak several languages and her liking for fast cars, twenty-something Modesty became a female icon long before the likes of Emma Peel, Lara Croft, or Buffy.


In Stef Penney's brand new radio adaptation of Peter O'Donnell's novel, Sir Gerald Tarrant, Head of a secret British agency, tempts Modesty out of retirement and into a job involving a young woman with extra sensory powers, an exotic desert location, and a larger than life public school villain, intent on murdering his way to a vast fortune.

With its perfect cocktail of glamorous settings, hidden treasure, a twisting turning plot, and characters to root for, the BBC describe A Taste for Death as "an action packed treat - and a guilty pleasure".

"If one person stumbles across this adaptation and goes out to buy one of the books for the first time, I will be happy," says Stef Penney, whose previous adaptations include Moby Dick and her own novel, A Tenderness of Wolves. "If a few people do, I will be ecstatic."

Revealing she chose A Taste for Death, which is not the first Modesty novel, because it is both her favourite and she might not get another chance, Stef is full of praise for both O'Donnell's character and setting."James Bond is more popular than ever, and the films have changed with the times – different actors play the roles, wear different suits, drive different cars and deploy the latest technology," she notes in a feature for the BBC web site.

"By contrast, A Taste for Death is firmly set in the 1960s and that is very much part of the pleasure – Modesty wears the fashions of the time and uses shortwave radio. She drives a classic car (a 1950s Jensen Interceptor) and listens to Thelonius Monk.

"And, in any case, when the chips are down and you are held captive by sadistic criminals on a remote archaeological site in the Sahara, no technology is going to find the buried treasure or overcome the villains who have stripped you of all your gear.

"Only Modesty and Willie’s unique ingenuity and will power can do that. And only their sense of humour and irreverence can make the whole thing so much fun.

With an original score by Goldfrapp's Will Gregory, arranged by Ian Gardiner, and performed by the BBC National Orchestra of Wales, conducted by Ben Foster, produced and directed by Kate McAll, this definitely looks like a show to tune into.

Thx for the heads up on this. Have listened to episode 1 and am about to catch with episode 2. A really good attempt - so far true to the Modesty style. Again, many thx.