Last Commandos of the year troop to the news stand

Here's the info on the final issues of DC Thomson's Commando for 2012 - a total of 104  stories, tucked away. It's been a good year for the title, helped, we're told by our coverage and plugs on other sites such as Blimey! It's Another Blog about Comics and others. Time for a quick celebratory pint in the Mess! 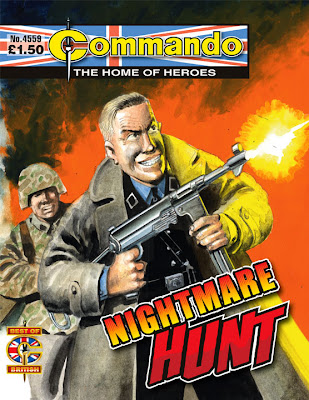 Almost every night, Captain Neil Rigby would wake up in a cold sweat, a nightmare vision before his eyes. The face he saw, twisted with evil, was that of the Nazi officer who had ordered his men slaughtered as he lay powerless to help.

Every time he saw that maniacal, distorted face he swore vengeance, never thinking he would get the opportunity.

Then fate intervened and Neil began his… Nightmare Hunt! 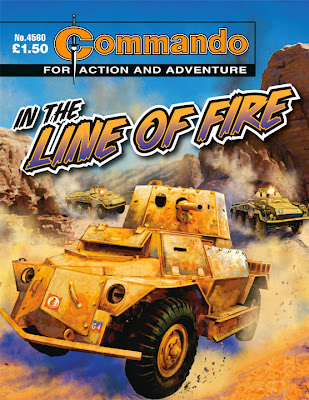 In the North African desert the fast-moving vehicles of the Allied armoured car reconnaissance units were always right in the thick of the action - constantly trading shots with the enemy.

Things got even more dangerous when two recce unit commanders - nursing a decades-old grudge between their families - began trying to outdo each other. Both were determined to be first… In The Line Of Fire... 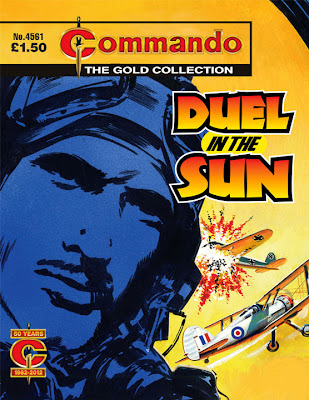 Bert Johnson settled in the pilot's seat of the RAF fighter. He wasn't a pilot, but he revved the engine, taxied the plane to the runway, and took off.

As he handled the unfamiliar controls and circled to gain height he saw, coming straight at him, a crack squadron of the Luftwaffe.

Bert's thumbs fumbled for the gun-button on the joystick… Pilot or not, he would have to fight it out now.

“You can tell from Ken Barr's cover that this is an air story, yet the most important action takes place on the ground,” notes editor Calum Laird. “That action is the play between two men - one a frustrated would-be flier, the other a man who has flown, and fought, just too much. In the capable black and whites provided by Sostres, author Stainton paints a captivating tale that is in part all too believable, in part pure Commando invention.

“See if you can tell which bits are which." 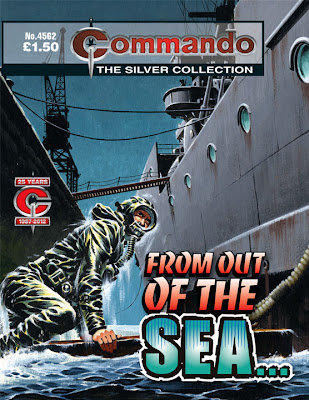 They came by night… sinister figures in black rubber suits, rising from the depths of the Norwegian harbour. And when they came, the Nazis shivered - for they knew that their precious ships, their vital war materials, were the target. How they dreaded those men from out of the sea…

“Commando stories come with all sorts of different settings but the thing that makes them Commandos is the aggro between the players in the drama,” says Calum. “This one, in the capable hands of Eric Hebden, has that hallmark. But, as with any story from the House of Hebden, things aren't as straightforward as they first appear.

“With dripping wet cover art by Ian Kennedy and strong, flowing lines inside from Cam Kennedy (no relation apart from the standard of their art) this story is a winner from Page One.

“You'll have guessed that I liked it.”

downthetubes is pleased to offer an exclusive discount on a subscription to DC Thomson's Commando comic, entitling readers to save 50% by ordering using our special discount code!

*Saving based on discounted Direct Debit price compared with shop price. First quarterly payment discounted by 50% at £12.50 and £25 per quarter thereafter. UK bank accounts only. One year discounted subscription rate of £99.
Posted by John Freeman at 6:00 pm