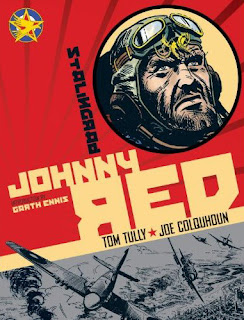 , the final Joe Colquhoun collection, will be published in January 2013. The volume features a third introduction by comics writer Garth Ennis about Stalingrad.

The publishers of the Charley's War collections also tell us more British comics collections are on their way, which is welcome news. More news as we get it!

should be out now and Volume 2 will be published next July. This series collects Rat Pack stories from Battle Picture Weekly.

War is a dirty business... so who better than criminals to fight it? When Major Taggart breaks four military convicts out of jail, they think they’re headed for Easy Street... but they couldn’t be more wrong. Before, they were scum -- now, they’re the Rat Pack!

is also on sale now. Drawn by Carlos Ezquerra, Major Eazy is a maverick soldier in a dirty war, caught up in the Allies' invasion of Italy in 1944 and determined to see justice done. Even when that means taking on villains on his own side, he doesn't pull any punches!

More movie star than military, Eazy was the most laconic and indeed British officer ever to grace the pages of a comic. This volume starts from the very beginning of his story.

Major Eazy 2, the second and final volume, will be out next year, and will collect the 'origins' arc set in Africa, plus the remaining strip from the series.

The series editor tells us he hasn't decided if Titan will collect the Rat Pack vs Major Eazy material yet, but it definitely won't be appearing in this book - but it will feature an interview with Major Eazy artist Carlos Ezquerra, who drew most of the series stories.