In Review: Alien - The Illustrated Story 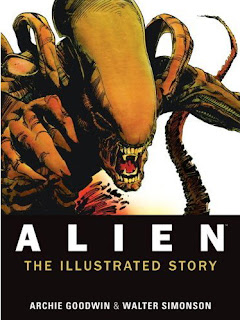 The Book: Two of comics greatest talents joined forces in 1979 to bring Ridley Scott's epic Alien motion picture to comics. Out of print for over thirty years, this brand new edition has been meticulously restored from original artwork in Walt Simonson's studio  presenting for the very first time the definitive artists edition of the greatest sci-fi horror ever.

The Review:  There are some books that I've kept for years, partly because they are great books and partly because there's some specific memory attached to them. Then there are the few that remain part of my library simply because, for me, they're the very best a certain genre offers.

The original Alien: The Illustrated Story is one of these, and I'm delighted British publisher Titan Books has reprinted it.

And no, not just reprinted it - they got artist Walt Simonson along for the ride, carefully restoring the original art for this stunning new edition, published as both a gorgeous-looking original art edition, and a more modestly-priced softback edition.

Somehow, I recall managing to read the original graphic album, published by Heavy Metal, before I saw the movie. Possibly a mistake in terms of movie enjoyment as its more memorable events (the chest-bursting over the breakfast table scene, being the most obvious) were no longer a surprize. But it's no wonder I cheated - how could you not want to read this New York Times best-selling graphic album as soon as it fell into your paws?

And it's just as I remembered it (albeit gloriously enhanced thanks to Walt's restoration). Archie Goodwin's script is, for me, still one of the best move adaptations to comics ever – no surprize given his abilities and track record – and Simonson's art is just a masterclass in visual storytelling, the tale moving at breakneck pace as Ripley and co try to defeat the near-indestructible alien.

It's no wonder the movie went on to become a successful comics line when this calibre of work went into the first Alien comics adaptation.

It's still as gripping as it was back when I first read it. Track a copy down and enjoy.

• Check out the Alien: The Illustrated Story restoratio page on Facebook
Posted by John Freeman at 3:35 pm