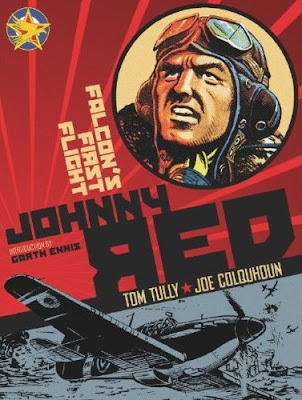 The Johnny Red strip created by writer Tom Tully and artist Joe Colquhoun began in Battle Picture Weekly and Valiant in January 1977. It told the story of a young disgraced British fighter pilot who took off from a CAM ship to protect his Arctic Convoy against German attack before flying this Hurricane fighter to Russia where he joined the Red Air Force's Falcon Squadron.

This origin story for the character of Johnny Red was based on a real incident in World War II that occurred during the PQ18 convoy. That convoy is being commemorated today at Loch Ewe in Scotland by the Russian Arctic Convoy Museum Project.

Seventy years ago today PQ18 set out from Loch Ewe headed on the Arctic route for Archangel in the USSR. PQ18's predecessor, PQ17, had been attacked repeatedly by German forces and lost 24 of its 35 merchant ships, a devastating 68% loss rate. PQ18 was more heavily protected and part of that protection was the CAM ship SS Empire Morn.

Catapult Armed Merchantmen (CAM) were civilian ships fitted with a rocket powered catapult to launch a single Hurricane fighter into the air to protect the convoy from enemy attack. The CAM pilots were a special breed as in the middle of the Arctic Ocean they had nowhere to land their plane once they ran out of ammunition and fuel and so their choices were either bail out into the freezing ocean or crash land in the water and, assumed that they survived that, try to get out of the plane before it sank. Unsurprisingly most chose to bail out.

At 11.50 a.m. local time on 18 September 1942 Flying Officer Arthur Burr of the RAF Volunteer Reserve was launched in his Hurricane against 15 Luftwaffe Heinkel HE111 torpedo bombers. He shot one down and caused another to crash and none of the convoys ships were hit by their torpedoes. With no ammunition but a lot of fuel left he decided to attempt landfall at the nearest airfield, the Soviet Keg Ostrov aerodrome 240 miles due south. Remarkably, despite flying into fog in a plane with no radar, he made it to the aerodrome and became the only CAM pilot ever to save his aircraft after a combat launch. Arthur Burr was awarded the Distinguished Flying Cross for his actions that day and 28 of the 40 PQ18 merchant ships made it to Arkangel, a 70% survival rate which turned PQ17's 68% loss rate on its head. 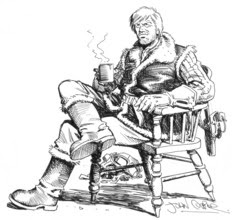 In Battle's version of the incident Convoy PQ18 became Convoy XQ14, the SS Empire Morn became the SS Empire Cape and Arthur Burr became Johnny 'Red' Redburn who, unlike Burr who returned to Britain with his aircraft and ship, remained in the Soviet Union to fight the Germans alongside his new comrades and went on to become one of the weekly comic's most popular characters.

Arthur Burr DFC is buried at the Heston (St Leonard) churchyard near Heathrow Airport and is commemorated on the Commonwealth War Graves Commission website.

There are more details of Arthur Burr DFC and the PQ18 convoy and how it relates to Johnny Red in the introduction to Titan's first Johnny Red reprint book Falcon's First Flight.