Jim Alexander's publishing debut came as writer of Calhab Justice for Judge Dredd Megazine. He then went on to script Judge Dredd, Pandora and O'Rork.

He has also written for DC (Birds of Prey, Batman 80-Page Giant), Marvel (Marvel Milestones) and Tokyopop (Star Trek Manga). 'King's Crown' - written by Jim and drawn by Richard Corben - has been adapted as Episode 1 of the upcoming TV series Metal Hurlant Chronicles.

downthetubes: How did you start out in comics and what drew you to this media as a storytelling form?

Jim Alexander: I'd read comics as a spotty youth - Battle, Starlord, 2000AD, etc. - but by my late teens had drifted away.  A friend introduced me to Warrior and on the strength of that I picked up an Alan Moore Swamp Thing from a newsagent rack (the ones that went round in a circle - ah, feel those waves of nostalgia).  It was part of the American Gothic storyline - I hadn't read anything like it this strange electric wondrous combination of Moore's writing and Bissette and Totleben's art - and that was me back hooked.

Go forward a few years and I thought "I can write comics!" I bought myself a creaky second-hand typewriter and started submitting various proposals to 2000AD and Marvel UK (Dan Abnett was particularly supportive). Feedback was on the right side of positive and I can be pretty stubborn at times, an essential combination when it comes to trying to break into comics.

downthetubes: What was your first paid work in comics and how did that come about?

Jim: I'd been sending then editor of Judge Dredd Megazine David Bishop some pitches - all rejected - but got to speak to him at a comic con in Glasgow.  At the time the Megazine was going from monthly to fortnightly, so it really needed new material.  We talked about Scotland, specifically its Judge Dredd version, Calhab.  I went home, typed up a proposal for the first series of Calhab Justice and the Bishop went for it. 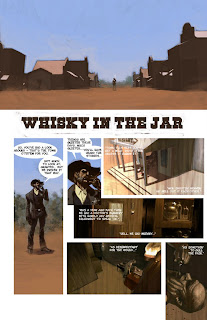 downthetubes: To date, what has been your favourite pro comics work other than your own self published projects and why?

Jim: The Metal Hurlant stories are my favourites with 'Whisky in the Jar' with art by Gerald Parel taking it by a stubbed nose.

downthetubes: You did a number of projects with Black Hearted Press - how did that come about?

Jim: Artist David Braysher is a good mate and he introduced me to Sha Nazir and John Farman.  They produced Black Maria and I was bowled over by the production values and the guys' enthusiasm for what they were doing. Something if I'm honest I had lost; I was really jaded at the time and lacking direction. I kept in touch and was privileged to be asked on board. With BHP we published Gabriel #1-4, GoodCopBadCop #1 and Scout One #1.

downthetubes: ... and now you've launched your own imprint, Planet Jimbot. What are your plans for that?

Jim: Planet Jimbot is me and Jim Campbell.  Our debut issue is Amongst the Stars #1, reprinting a story by me and Mike Perkins who has gone on to perhaps greater things drawing The Stand, Captain America, and the wedding issue from Astonishing X-Men :-) 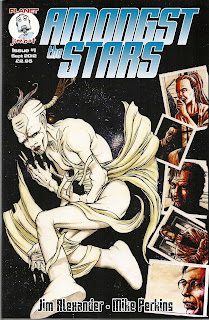 Amongst the Stars is a science-fiction tale featuring wayward humans and even more wayward aliens. Oh, and the art is lovely. Issues 2 & 3 will conclude the story. Also featured will be a back-up all-new strip by me and Luke Cooper called 'Wolf Country'. A group of settlers lays claim on holy land and make mortal enemies of its inhabitants, werewolf tribes.

downthetubes: What's coming up next from your company and what are your hopes for it, looking into the next two years?

Jim: GoodCopBadCop and Scout One are following me to Planet Jimbot. Also we have scheduled Amazing and Fantastic Tales and Jam.  I don't want to write everything, so we're bringing in new writers as well as working with up-and-coming and established artists.  We're looking to do high concept ideas that generate entertaining stories. If we achieve this everything else will fall into place.

downthetubes: How are you finding getting your comics out there, in print and digitally, do you have any advice on that front?

Jim: I do small print-runs and sell comics by post and at marts and conventions. I also send out the comic in PDF form.

Ideally, I'd like a bigger more established company to pick some of the titles up. Haven't dabbled in digital yet, although it is something that gets the ears perked when mentioned in conversation.

Where producing your own comic is concerned, there has never been a better time.  So don't talk about it, just do it.

downthetubes: Alongside your work in comics, you also do comics writing workshops. Is that something you take to schools and literature festivals?

Jim: Funnily enough, I've just had a school get in touch for advice on how to produce a comic strip. The workshop looks at storytelling structure - specifically with a view to writing comics - but the skills apply to any type of writing really.

I held my latest one at Carlisle MegaCon where I focused on 'theme'.  Those attending talk about their story ideas and we then try and look at it from various different angles. It's rather good fun, hopefully instructive too.

downthetubes: What kind of interest do you get in these, given the paucity of professional comics publishing opportunities in the UK at present?

Jim: Interest is pretty keen. People want to write and everyone should write of course.  Understanding aspects of structure and not being a slave to it, but rather moulding it to suit your writing style, gives you a much improved chance, in my opinion, of writing a better story and getting it across to over-worked editorial and publishing staff.  It doesn't just have to be about comics, but that helps.

downthetubes: What one piece of advice do you give prospective comic creators if asked?

Jim: Get a job.  Get a regular means of income.  If you still want to become a creator you will find the time believe me.  Maybe one day you will be in the glorious position of being able to give up the day job for the dream job; then you may do so with my blessing.

• Amongst the Stars #1 by Jim Alexander & Mike Perkins is out now. £3.50 to your door. Contact planetjimbot@gmail.com for details.

• Jim Alexander's Blog is at: http://jimalwriter.blogspot.co.uk/