Have some Sympathy for the Devil 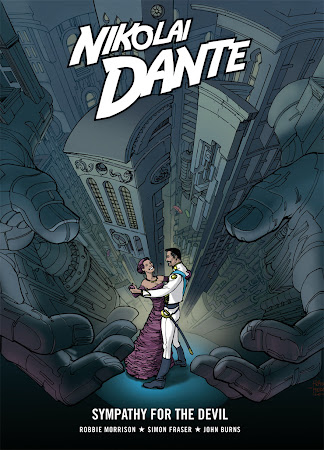 For more than 15 years, Russian rogue Nikolai Dante has fought, thieved and loved his way through life in the 27th Century.

2000AD has always bred a different kind of hero and brought the world a different way of telling stories - now one of its most popular characters comes to an end, courtesy of his original creators Robbie Morrison and Simon Fraser, in Sympathy for the Devil, set for hardcover release on 11th October 2012.

Since its debut in 1997, Dante has become an iconic part of the British comics scene with his swashbuckling antics and devil-may-care bravado, and the long-running story reaches its explosive conclusion in this full-colour volume.

In this final instalment of his epic story, Dante must escape from captivity in order to lead the revolutionary army in its final battle against his tyrannical father, the psychotic Dmitri Romanov.

With additional art from industry legend John M. Burns, Sympathy for the Devil is both a fitting and striking end to this stunning epic.

Join Nikolai Dante as he reaches the end of his journey ... or does he?