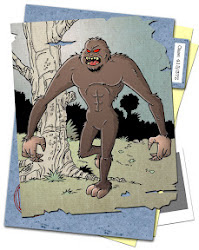 Artist Dave Windett - who has drawn comics featuring some of the biggest licensed characters including Korky the Cat, Inspector Gadget, Tom and Jerry and Bugs Bunny - has once again teamed up with writer and frequent collaborator John Gatehouse (Trick or Treat) to work on a series of children’s illustrated books under the working title of The Monster Hunters Guide for Penguin US.

“Back when John Gatehouse and I were working on Lazarus Lemming for The DFC, we came up with an idea for a kid’s book which we called the Monster Hunters Handbook” said Dave Windett who was one of the guests at Malta Comic Con 2010."

The creative duo put together a proposal which John Gatehouse described as "the fun way to help brave-hearted readers to become celebrity 'monster-hunters'!

"We introduce them to the terrifying, bloodcurdling supernatural world that exists outside their own front door. (Monster-hunting is a lot more fun than flipping burgers for a living - although we wouldn’t suggest taking out any long-term pension plans!)”

“It’s taken a while, and there have been a few bumps along the way," says Dave, "but thanks to the hard work of agents Watson Little, John and I are now working on a series of four books for Penguin US.”

The Monster Hunters Guide book will be edited for Penguin by Rob Valios (one of the team behind Reading with Pictures) and the first outing of the series is due to be released before Halloween 2013.
Posted by John Freeman at 12:00 pm