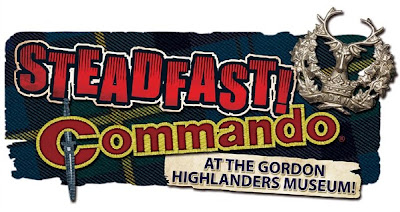 For the third time in less than twelve months the Commando archive has been opened to allow artwork to be used in a public exhibition. After the Draw Your Weapons exhibition in London's National Army Museum (with downthetubes being the only British comics website invited to the opening night last September) and the Battlelines exhibition in the University Of Dundee barely a month later, the Gordon Highlanders Museum in Aberdeen are about to present Steadfast! Commando at The Gordon Highlanders Museum.

This is a new display of Commando artwork especially selected by the museum from the DC Thomson archive and includes a special section commemorating the 70th anniversary of the Battle of El Alamein and the role of the Gordon Highlanders in the Desert War in 1942 and 1943. The exhibition opens at the museum on Monday 9 July 2012 and runs until Friday 30 November 2012 and entrance to the Steadfast! exhibition is included in the general admission price for the museum. 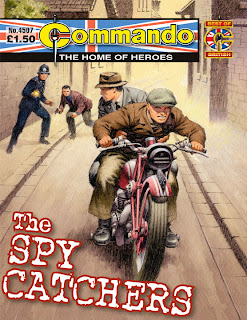 Espionage is as much a part of warfare as infantry or artillery. Knowing what your enemy is planning is a great help when it comes to stopping him. But all the time you’re watching him, he’s watching you, isn’t he? Which is why you need spy catchers, men who will sniff out the spies and neutralise them. British Army lorry-driver Arnie Kershaw loved to read about the adventures of such men…but even he never dreamt for a moment that he’d be caught up in their activities for real. 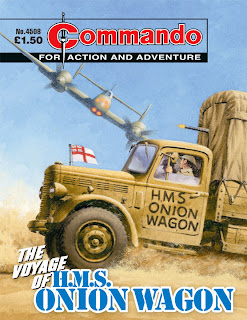 How did a motley crew of British and New Zealand sailors end up on a British Army Bedford lorry in the desert?
How did a routine operation so very quickly go wrong and become an unexpected voyage into danger?
Hop aboard HMS Onion Wagon and find out! 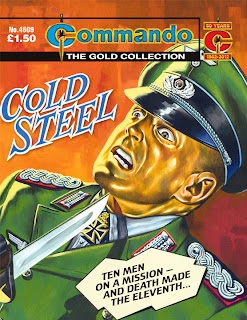 Ten Desperate Men… Armed to the teeth, they slipped and slithered from the hull of a submarine into a wave-battered rubber dinghy. A grim cargo of trouble on a life-or-death mission. Ten desperate men who were destined to become… Ten dauntless heroes.

In his introduction to this Gold Collection reprint, Commando editor Calum Laird says, "Secret, dangerous, well-nigh impossible missions have been firm favourites with Commando readers (and editors) since the earliest days. The title was less than a year old when Gordon Livingstone’s trademark art gave life to ten men on the deadliest of missions. (The ten-man mission is another theme that’s been visited and re-visited over the years without getting stale.) Author Kenner’s tale sets the men at their officer’s throat from the off…as soon as they settle with the Nazis he’s likely to be next. All that AND Ken Barr’s menacing cover? What a bargain for a shilling!" 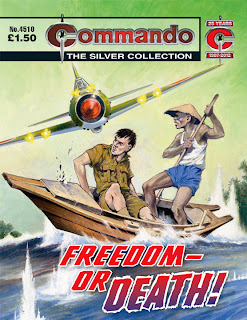 To a Gurkha soldier honour is all important, and young Lal had a very important debt of honour to settle with his officer, Lieutenant Archie Cameron. So when the two men were captured by the Japs and sent to different POW camps, Lal was determined to free Archie. There was only one snag, though. First he had to get free himself!

In his introduction to this Silver Collection reprint, Commando Deputy Editor Scott Montgomery remembers, "As young readers, whenever my brothers or I started to read a jungle-based Commando book we always hoped it would feature Gurkha soldiers. There was always something just so…for want of a better word, cool about those stoic, loyal and deadly efficient fighting men from Nepal, armed with their iconic, curved Kukri blades. And I was always glad that they fought on our side. Even twenty-five years after this great jungle tale was first published, I still feel the same way about the amazing Gurkhas."

• Steadfast! the Commando artwork exhibition at The Gordon Highlanders Museum in Aberdeen runs from 9 July to 30 November 2012. There are more details about the exhibition on the museum website.
Posted by Jeremy Briggs at 7:05 am