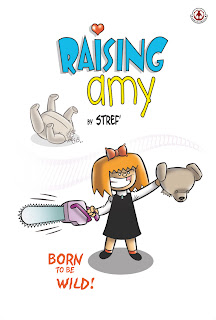 Stref', who is also known as Stephen White, has a diverse amount of work to his credit with strips in The Beano and The Dandy, his hardback anthology Milk and the violent X. Raising Amy, published by Markosia, is a collection of humorous newspaper strip cartoons featuring an out-of-control youngster.

Amy strains the nerves of her long suffering mother and father who only get a rest when they can persuade, cajole or over-pay baby-sitter Flower to give them the night off, while Flower in turn has to cope with the unwanted attentions of Dick who wants to be her boyfriend but, in reality, is effectively her stalker. As for what happens in the house, well Amy's toys aren't safe from her attentions, she manages to bring zoo animals home as pets, nothing seems to prevent her accessing her father's tool box for all sorts of nefarious schemes and, perhaps worst of all, she has developed a taste for earth worms - live earth worms.

Stref's previous work, X, definitely put the graphic into graphic novel and Raising Amy couldn't be more different - unless you happen to love cuddly toys which, as the cover suggests, take a lot of abuse from this precocious child.

There are 250 colour cartoon strips in the book which begin by breaking the reader in gently to what is going on in Amy's home with single strips telling each incident before moving on to themed sets telling of longer on-going events. Stref' also manages to show his taste in cinema with strips featuring references to films such as The Shining, The Godfather, The Wicker Man and Psycho.

Perhaps though my favourite strips are those in which Amy talks to her artist, telling him off and even threatening him enough for him to take his revenge. Indeed some of these strips even have the artist's hand and pen included Beano-style and, inevitably, even he has problems controlling her. These hypertextual moments raise the book beyond the norm as Stref' plays with the format of Amy's world for his, and our, entertainment.

With Raising Amy Stref' has created a glossy, colourful and delightfully enjoyable Minnie The Minx for the 21st century.

• There are more details, preview strips and ordering information on Raising Amy on the Markosia website.

• There are more details of the book on the Raising Amy Facebook page.

• Stref'/Stephen White will be at the Glasgow Comic Con on Saturday 30 June and Sunday 1 July where he will have copies of Raising Amy, along with X and Milk+, for sale.
Posted by Jeremy Briggs at 7:00 am