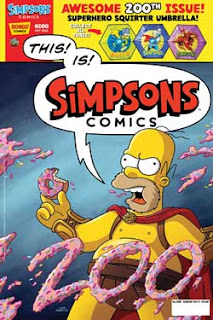 Next Thursday is something of a milestone for British Simpsons fans as the UK edition of Simpsons Comics reaches its milestone 200th issue.

Based on the world’s favourite family, Simpsons Comics is the official magazine of the cartoon, published by Titan Magazines, and comes packed with adventures featuring Homer, Bart, Marge, Lisa, Maggie and all the residents of Springfield.

Fans of the show will want to grab a copy of this landmark issue, wrapped in a specially drawn cover by the show's creator Matt Groening and his creative team - and the issue comes with another hilarious Homer Simpson comic strip story. In a panic about missing ‘Free Pizza Day’ due to the flu, Homer ingests the entire contents of the medicine bottle! However, if he thought a world without pizza would be bad, his subconscious (flu-syrup addled) mind takes him to a world without beer!

“In this year of celebrations and anniversaries, it is time for the first family of Springfield to join the party!", notes distributor Comag.

This special issue also reveals the best covers of the last 15 years – as chosen by the discerning readers and includes a competition to win one of a 100 great Simpsons prizes.

“We are all so excited about hitting this milestone issue of Simpsons Comics," commented loingtime editor Martin Eden. "And we're still going strong - just wait ‘til you see some of the amazing covers and strips we've got coming up over the next few months!”