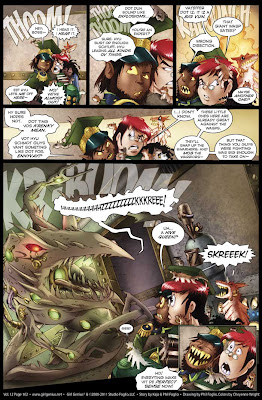 Phil and Kaja Foglio, creators of the steampunk web comic Girl Genius (www.girlgeniusonline.com), are to be Guests of Hounour at the Congenial convention in Cambridge next month.

Taking place over 10-12th August 2012, Congenial is an SF and role-playng convention offering a programme of talks and panel discussions,  role-playing games, and socialising.

The event is one in a series of UK Unicons - small science fiction conventions held in universities and colleges, which started with Unicon 80 held at Keele University in 1980. Congenial is Unicon 24.

The orgnaisers hope the event will put web comics firmly in the spotlight.

"Web comics are different from print," they argue. "You have to commit yourself to another installment of the storyline frequently and incrementally, and you can't retcon stuff half a book ago without losing the respect of your readers. You have to work constantly, without any breaks except those you create by working harder - and if it's topical, you can't do that very much.

"What makes this worthwhile? We'll ask Phil and Kaja, but one thing is obvious: you're never forgotten. Your readers think about you every week, at least. That makes a difference. It also saves the capital costs of print runs and stock holding, and makes you immune to the whims of distributors. It's a very raw and direct form of storytelling.

"Steampunk is more than just an SF trope now. The appeal of the beginnings of the modern age, with its visions of empire and view of the world as knowable and tamable, is strong in an period when uncertainty seems to increase day on day. Steampunk is fun because it inverts so many current ideas, while being more real than fantasy. The stiff upper lip appeals to an age that has seen the tragedies of the twentieth century, and treats emoting as socially desirable. Discovering places was fun, but it's all been done now. Assumed membership of the elite appeals in an age when the internet is making us face up to the sheer number of idiots that are around. Different social absurdities have a great appeal.
In the Foglios' hands, steampunk (or gaslamp fantasy as they prefer to call it) is more straightforwardly mad-science alternate history.

"In Girl Genius, we have a universe where science and engineering works really well for the talented, but people are more recalcitrant. And that's just naturally funny."

• Membership is £30 for the weekend, bought in advance; membership by the day is available at the door. For full details, visit www.congenial.org.uk