Are fantasy stories too scary for younger children? 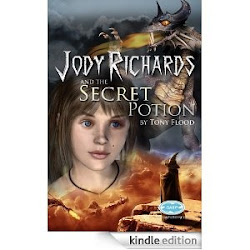 Author Heather Flood has backed a warning given to parents not to read Harry Potter or other popular fantasy adventure books like her husnand's recent book, The Secret Potion, to very young children.

Quite honestly, this all sounds like a contrived attempt to stir up some publicity for some new books - but the debate over what's good or bad for children to read, and at what age, is one that has often drawn comics into the mix, so we wondered what our own readers thought about this.

"I do believe that it can be harmful to read scary stories to some younger children, especially at bedtime," says Heather, author of Mousey Mousey and the Witches' Spells and Giant Sticker Monster and Other Children's Stories.

"A lot depends on the individual child, but I personally would not read Harry Potter or my own husband Tony's The Secret Potion to children under the age of five."

Tony Flood, the former Controller of Information at Sky Television, recently issued a warning by saying: "I believe the Harry Potter series and my own Jody Richards and The Secret Potion are excellent fantasy adventure stories for those aged five to 100, but I feel some of the plots and characters are probably not suitable for many children under five or even aged five.

"These youngsters might find it too frightening to hear about evil wizards and witches and nasty goblins or see them in films. In the case of The Secret Potion, there are also poisonous spiders and possibly the world's worst monster to contend with. It's great fun but also scary.

"Young children need to have stories especially written for them,," he argues, "containing more gentle characters, and my wife Heather has catered for this age group with her adventure books.

"Her books are being read to children aged three to nine, and the feedback Heather has received about her loveable characters has been excellent."

Mr. Flood, whose The Secret Potion book has apparently been hailed by reviewers, including actress June Whitfield, and acclaimed as the ideal follow up to Harry Potter, has emphasised his point in a YouTube video.

The Floods are clearly well versed in PR and Marketing - Tony also runs My Voice Publishing (www.mvpub.co.uk) in Eastbourne, which offers advice to would-be authors on how to get published - but their arguments are perennial. What do our readers think?

- Tony and Heather are providing special signed copies of their books, complete with personalised, dedicated messages, post free and at reduced prices, to celebrate the launch of their new website www.fantasyadventurebooks.com