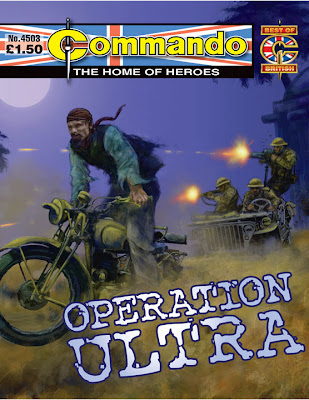 Four more Commandos are now on sale, with new stories from Alan Hebden and Mac Macdonald, the latter's 'Soviet Spitfire' sure to interest fans of Battle's classic 'Johnny Red' strip. Here's the gen...

Operation Ultra as British Intelligence's top secret programme for the breaking of messages sent by Germany's Enigma machine. It was imperative that the enemy did not discover that the Allies had succeeded, or the cyphers would be changed and the war perhaps lost.

In 1943 Captain Bob Draper and Lieutenant Andy Coates of the Long Range Desert Group unexpectedly found themselves caught up in their own Operation Ultra. It was a deadly game of espionage and counter-espionage with all manner of double-crosses and treachery.

This wasn't just danger... it was ultra danger. 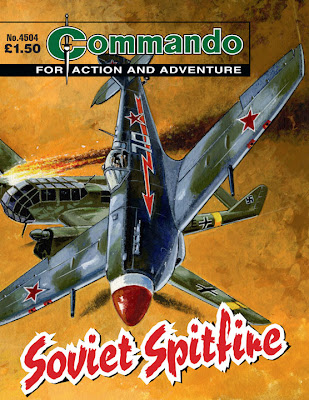 Paul Daly was a Spitfire pilot - a pretty good one as the DFC ribbon he wore attested. But being a fighter pilot isn't like being, say, an accountant. No, it's a risky business and all too soon a Luftwaffe shell put paid to his flying when it smashed into his knee.

Though part of him was glad to be out of danger, another part longed to get back in a cockpit once more, though he didn't think he'd have to travel to Russia to do it. 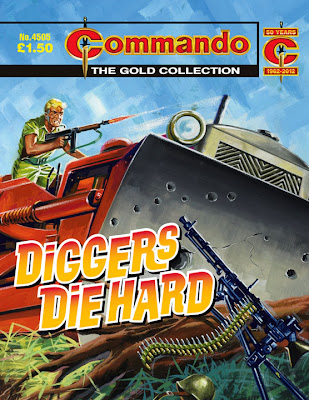 Johnny Grogan could do anything with that bulldozer of his. Build roads, clear forests, dig canals... he'd even make it sit up and beg if you asked him to.

Then came the day when he had to do something new with it, the day he had to turn it into a tank!

It was the Italian Army's fault - they should never have tried to get tough with a guy like Johnny Grogan. For they found they had a new war on their hands - Grogan's war!

"Here we have three members of the first Commando team to take to the field, playing their 'A' game, despite the hideous pun in the title willed on it by some editor or other," notes Commando Editor Calum Laird. "Eric Hebden's tale takes you to the outer fringes of the Second World War to find a nicely-off-the-wall situation. This is something Commando has often done over the tears, avoiding the obvious, seeking the novel.

"With Gordon Livingstone settled into his stride as a Commando illustrator par excellence and Ken Barr's stonking cover setting the right note this one is solid gold from start to finish. I think I might read it again." 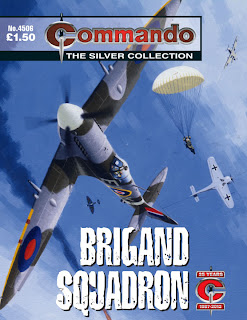 For fighter pilot David Morgan it was the proudest moment of his life when he was posted to the unit known as “Brigand Squadron”. They were famous for their brave deeds, and their motto was “Never run, never yield.”

But he was in for a nasty shock when he arrived. These men weren't fierce brigands, they were frightened sheep!

"Many people wonder how cover artist Ian Kennedy goes about his craft, and I hope he won't mind me sharing a little insight here," says Scott Montgomery, Commando Deputy Editor. "Just how does the artist manage to make each aircraft look so dynamic? Well, it's simple really. Every time Ian sits down at his drawing board he imagines that he's actually in the cockpit himself - ensuring that every picture is unique.

"You see, Ian had always wanted to be a pilot... but selfishly, we're glad that Mr Kennedy ended up drawing planes instead of flying them!"

• Commando Comics iPad App on iTunes
Posted by John Freeman at 9:32 am