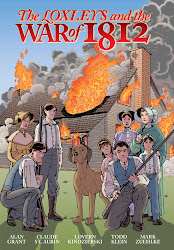 The Book: The story follows the Loxleys, a Canadian family living in the Niagara peninsula! as they're torn apart by the American invasion of Canada in 1812, and the subsequent war that raged across both countries as British troops, Canadian militia, and First Nation warriors sought to thwart the expansionist plans of the American government.

The story follows the characters through key historical events as they deal with the realities of war on their doorstep, the personal loss, setbacks and victories tied into the conflict.

The book comprises some 176 pages - 101 pages of story and 53-page summary of the warm written by acclaimed Canadian military historian Mark Zuehlke, presented with maps and illustrations.

The Review: Alan Grant, perhaps better known to DownThe Tubes readers for his work on 2000AD and Batman, delivers a superb script on this graphic adaptation of a little-known conflict that has echoes with troubles facing our contemporary world.

Enhanced still further by the beautiful line work of Claude St. Aubin, Grant not only tells the tale of the war itself - in which Britain most famously attacked and burnt the White House, but is also noted for some of the United States most appalling actions against Native Americans - but also gives the conflict a powerful humanity. With much of the war told from the perspective of those who fought and suffered because of it, the stupidity of the conflict and the actions of those who ran it are all the more exposed, such as the actions of men who stirred up the fight in the first place, then brokered for peace - only for both sides to continue fighting for months after a peace treaty hasd been signed, because negotiations took place on the other side of the Atlantic.

Alan Grant pulls no punches when it comes to the dangers of war, although there is none of the visceral horror that ocasionally graces his better known work. And yet such events as the massacre of troops, the casual disregard for human life by mercenaries are made more telling by Aubin's deceptively simple but beautifully realized line work.

The War of 1812 is perhaps little known to many on both sides of the Atlantic, despite its wider outcome: the development of Canada as an individual nation and a Canadian identity being perhaps one of the most obvious. For Britain, it was a war fought on the sidelines, when Europe was already mired in conflict with Napoleon. Fighting another war on the other side of the world at the same time must have - and clearly was - a logistical nightmare, with Britain's navy for example clearly under strength in comparison with its recent successes against the French in the Mediterranean and the Battle of Trafalgar.

This is a part of America's shared history peppered with what might have beens and what ifs, but The Loxley's and the War of 1812 never strays into such supposition, offering a straightforward and detailed re-telling, in pictures and text, of an oft-forgotten war. It's a terrific book, well deserving of a read by anyone at all interested in the period, and a powerful story of those caught up in war - at any time. Recommended.

- Note the Amazon link right is to amazon.com, not amazon.co.uk

In addition to the graphic novel, Renegade Arts Entertainment has also hired Oscar nominated screen writer Tab Murphy (Thundercats, Batman: Year One) to adapt the story into a school play, most recently performed at the Canmore Collegiate High School Theatre, as well as a movie screenplay.

Fans wanting more on The Loxley's and the War of 1812 can visit Renegade’s website, www.1812timeline.com, which incorporates the fictional characters from the book, and takes you through the events leading up to, during and after the war.