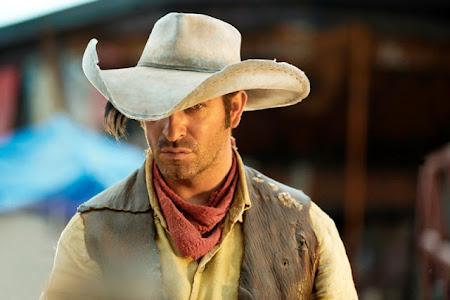 I've just been catching up on news about Cinebook's upcoming releases, but alongside info on their new titles the bande dessines publisher has offered a quick reminder that the live action Lucky Luke film is now available on DVD.

The release from Arrow Films, is well timed, considering the film stars Oscar winner Jean (The Artist) Dujardin stars as gun-slinging cowboy in this new comedy Western based on the best-selling French graphic novels.

When the President wants to restore law and order to Daisy Town there is only one man fit for the job ‘the man who shoots faster than his shadow’ – Lucky Luke! Accompanied by his faithful companion Jolly Jumper, the fearless Luke takes on Daisy Town’s worst criminals.

Crossing paths and gunfire with Billy The Kid, Jesse James, Calamity Jane and Pat Poker is there any cowboy star left for Luke to encounter?

First released in cinemas in 2009, web site Twitch praised the film's design, noting "the attention paid to the source material here is truly remarkable, the film looking like it simply leapt up off the printed page."

This fun spoof based on the classic comics by Morris and Goscinny also stars Michael Youn, Sylvie Testud and Daniel Prevost.

In a recent interview for the Huffington Post about the film last month, Dujardin revealed he's a huge fan of the original comic.

"At home, at your cousin's, in your godmother's bathroom, in the old cupboards of old houses in the country, there's always an old Lucky Luke around, often next to an old Tintin or Asterix," he said. "Out of the three comics, I've always felt closest to Lucky Luke. The drawings in Tintin are too minimalist, he always seemed too androgynous... I don't want to put the others down by comparison, but Lucky Luke was the only 'hero' to me. As a kid, I loved heroes on TV and in movies, and Lucky Luke was my comic book hero.

"I never doubted that I was Lucky Luke," he added, of playing the role. "It's very pretentious to say that, but I knew that I could be the character. Add something to him, give him masculinity, make him a movie hero. I'm convinced that if you worry too much about the way people see you, you become paranoid. You can't worry about what people think of you.

"There's only one question to ask yourself: what do you really want to do? Go to Argentina for four months and be a cowboy? Then do it. Thanks to Lucky Luke, I had a western to do. A French western, but a western nonetheless."