In Review: Disrepute by Thom Ferrier The book: A collection of Thom's medicine-inspired cartoons, most originally published online at www.disrepute.info

The Review: Thom (in reality, Doctor Ian Williams), also author of Graphic Medicine and other books, editor at GraphicMedicine.org, has been sending me copies of his work for some time now. His work is keenly observed, often dark - some might say bleak - but throws up a mirror to the human condition as only someone working in health care, I suspect, could.

(Darryl Cunningham's strips evoke a similar view - I've yet to read similar life-inspired comics from a police or fire person, but I'd imagine they too might similarly be tinged with a black, acerbic melancholia).

According to his official bio, Thom has studied both medicine and art and is "a part time General Practitioner in a small rural market town somewhere in the UK" and has an interest in the Humanities and how the arts relate to medicine.

He most definitely, as claimed, has a vitriolic streak, often railing against the frustrations ofgovernment interference in medicine, managerialism and human greed, to name just a few of his targets for his cartoons and commentary. 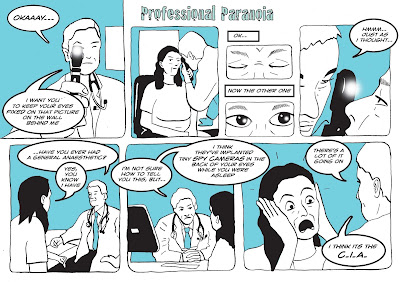 Yet, while he's cutting about patients that, inevitably as he notes, "severely try his patience", for the most part his cartoons, while often full on darkly humoured, reveal a passion for the human condition, with a keen eye for eccentricity and personal foible - including his own.

The subject matter may often be unsettling - his cartoons about suicide are not for the squeamish, including one in which an individual builds a guillotine for his own use in his cellar - but this collection offers a compelling, beautifully printed 'taster' for Thom's larger work.

- To buy Disrepute or for more Information: www.disrepute.info