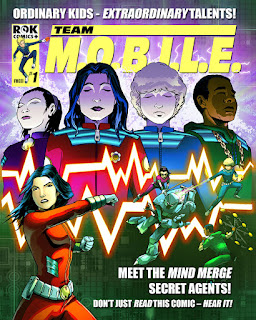 Featuring a fully authored audio soundtrack and its own theme tune, TEAM M.O.B.I.L.E. is the exciting story of teenage secret agents battling dangerous enemies across the globe.

An ongoing adventure story, the first issue of TEAM M.O.B.I.L.E. centres on the story of misfit duo Maisy Brown and Sam Thompson, who are recruited into a secret organisation to battle crime, terrorism and other dangers.

Jonathan has long harboured an ambition to marry comics with sound and published on mobile devices including the iPad and iPhone. Inspired by a love of James Bond and comics, he came up with the back story for the comic, including its top secret 'MindMerge' technology and gadgets.

"We are really pleased with the originality and quality of our first audio comic which has just been published on the iTunes store and we look forward to developing the story further," said Jonathan. 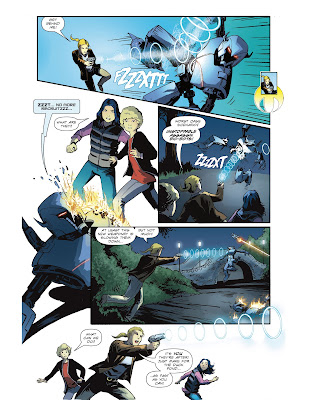 The strip is written by John Freeman from storylines by Jonathan Kendrick, with art by Andrew Chiu. Kris Carter is colouring the title, with Jim Campbell providing lettering and logos.

John's credits include work for Marvel, Judge Dredd Megazine and Black Ops Extreme for STRIP – The Comic Magazine, but he's perhaps better known as an editor, for ROK Comics and titles such as Doctor Who Magazine, Star Trek Magazine, STRIP and many others.
Andrew's credits include 2000 AD, the mainstay of the British comics industry, DC Comics, Vertigo Comics and ILEX Press.

Kris Carter's credits include Transformers and Doctor Who while Jim Campbell has worked for pretty much every major British comic publisher and some American companies, too.
The soundtrack, which complements the strip action, features the voices of both British and American actors, produced by Sneaky Snake Films in New York. The Team M.O.B.I.L.E. theme tune was created by accomplished composer Bob Townley, who's worked with a number of established chart artists in the US and UK.

Further comics are in development.

ROK Comics, part of ROK Global PLC, continues to provide mobile comics content for WAP subscription services across the globe and is currently working with partners in India, Bangladesh and Sri Lanka.