Having taken a lot of photos of the various creators at the Hi-Ex comics convention, which took place at the Eden Court complex in Inverness last weekend, there was never going to be enough room in the main downthetubes review of the con to include all the images. Instead we present a selection of those images of the creators along with links to their websites, blogs and/or Facebook pages. They are in no particular order and the first part of this photo feature is here. Artist Nigel Dobbyn has an eclectic selection of titles to his credit from The Beano's Billy The Cat to 2000AD via Thunderbirds and Transformers. The image he is showing here is entitled Primeval Priest and is available to buy from his website.

There are more details of Nigel Dobbyn's work on his website. 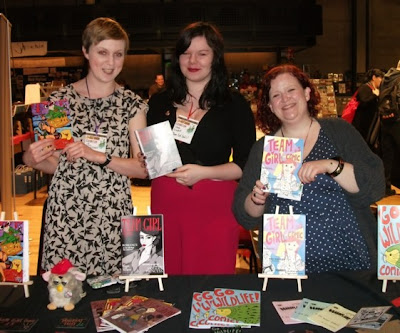 Glasgow's small press Team Girl Comic have four issues to their name as well as a selection of individual contributors' own titles and did a good trade, particularly on the Saturday. Shown here are editor Gillian Hatcher (left) with contributors Coleen Campbell (centre) and Clare Yvette (right). 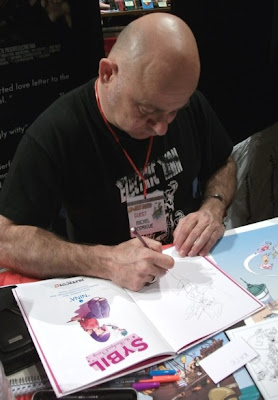 French artist Michel Rodrigue is currently resident in Scotland and having been at the previous Hi-Ex was back this year on the Cinebook stand. His Cinebook titles are the two modern Clifton titles Jade and Black Moon which he was signing and sketching over the weekend. He is also the writer of the French series Sybil La Fee Cartable which is on its third book in France and the first book of which has just be translated into English by Papercutz as Sybil The Backpack Fairy and he was more than happy to sketch and sign copies of it as well.

There are more details of Michel Rodrigue on Lambiek.

There are more details of Sybil The Backpack Fairy on the Papercutz website and of Clifton the the Cinebook website. 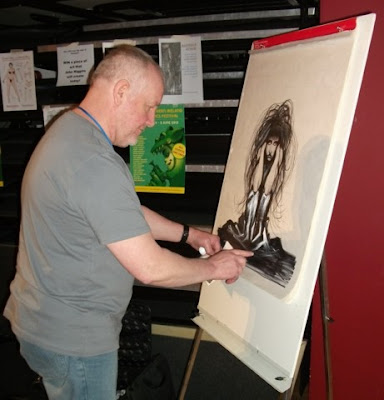 From pink fairies to something rather darker and artist John Higgin's RazerJack, the death-bitch from the Twist Dimension. To promote RazerJack, John produces illustrations at each of the conventions that he attends and here is the image that he was working on on the Sunday at Hi-Ex.

There are more details of John Higgin's work on his website and of RazerJack on its Facebook page. 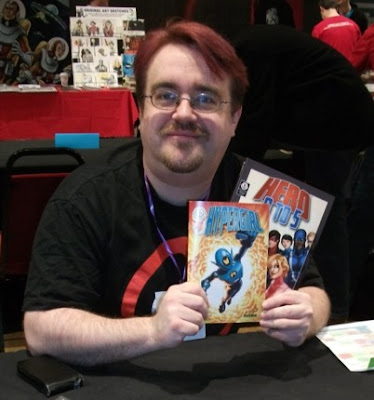 Write and artist Ian Sharman is also editor of Orang Utan Comics and AAM/Markosia as well as writer of Alpha Gods and Hero: 9-5. He took part in the Hi-Ex Pitching and Portfolio session on the Sunday. His latest title, as seen above, is Hypergirl.

There are more details of Ian Sharman's work on his blog and on the Orang Utan Comics website. 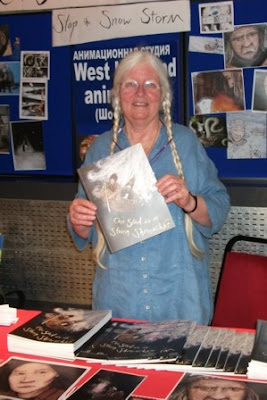 Perhaps the most unusual graphic novel available over the weekend was writer and animator Leslie MacKenzie's Gaelic title Cuir Stad Ak An Stoirm Shneashda which translates as Stop The Snow Storm. With art by Shona Shirley MacDonald, it uses the idea that the first peoples of Scotland were not from the south and Europe but from the north and the Arctic regions. As part of the publishing deal with the Gaelic Books Council the title will not be published in English for several years.

There are more details of Leslie MacKenzie's work on her website while Cuir Stad Ak An Stoirm Shneashda will be available from the Gaelic Books Council website. 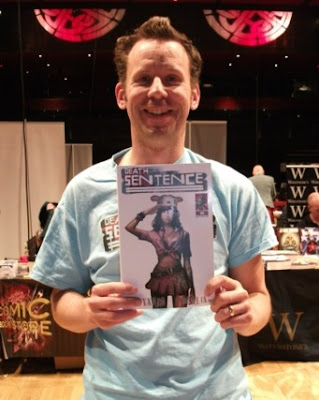 A comic strip with killer STDs in it just sound like the sort of thing that should be in CLiNT magazine and the editorial team of CLiNT obviously thought so too. As can be seen above, artist and writer Monty Nero's Death Sentence started life as a small press comic but will get a new lease of life, and a lot more exposure, when it begins in CLiNT Vol 2 No 1 very soon.

There are more details of Monty Nero's work on his website and blog. 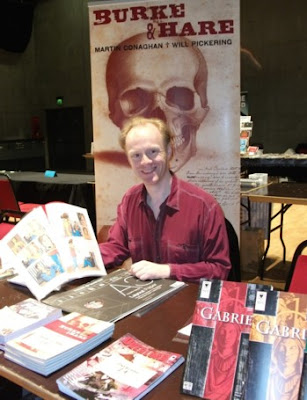 Artist Will Pickering worked on the Burke and Hare graphic novel published several years ago as well as contributing to a number of Glasgow based small press titles. He was also displaying Black Hearted Press' Gabriel title written by Jim Alexander.

There are more details of Will Pickering's work on his blog. 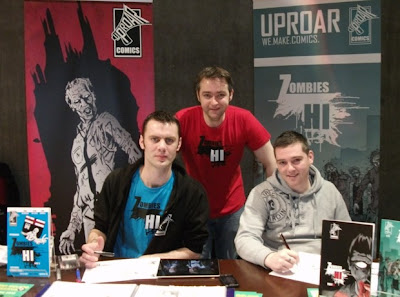 Londonderry's Uproar Comics came together through the city's 2D Comics Festival and its 2D Collective offshoot. They publish the Zombies Hi title which is an anthology of the main ongoing Zombies Hi story backed up with short zombie text stories and comic strip and has reached its fourth issue. Set after a zombie apocalypse within the defensive walls of the City of Derry, the comic is widely distributed within Northern Ireland. Artist Kevin Logue (left) drew attendees as zombies while writer Danny McLaughlin (centre) drummed up support and artist John Campbell (right) worked on pages for forthcoming issues.

There are more details of Zombies Hi on the Uproar Comics website. 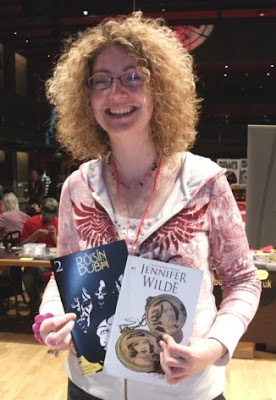 Last and by no means least, especially since one of her titles is Eagle Award nominated this year as Best European Comic, is Irish writer Maura McHugh. Her two titles for Dublin's Atomic Diner Comics are the Eagle Award nominated 1920s mystery Jennifer Wilde and the supernatural Roisin Dubh as seen above.

There are more details of Maura McHugh's work on her website.

There are more details of Jennifer Wilde and Roisin Dubh on the Atomic Diner website.


The first part of Comics Creators At Hi-Ex is here.