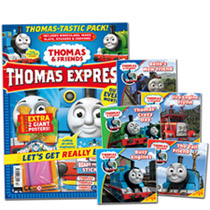 The launch comes as part of a re-branding of their Thomas-inspired range following extensive market research.

The new monthly magazine joins the long-running bi-weekly Thomas & Friends title on British newstands and is priced at £3.99.

Meanwhile, Thomas & Friends will have a makeover with its issue on sale 15th February and come with even more Thomas facts, maps, puzzles and stories, plus an exclusive Thomas gift free with every issue. Standard issues retail at £2.45.

The Thomas & Friends brand has been supporting two magazine titles in the market for over 10 years - in fact, the first Thomas titles were published by Marvel UK in the 1980s - and Egmont says it has ambitious plans for growth with this new portfolio, which has an estimated annual retail sales value of £5 million.

The re-branding comes just as US toy giant Mattel completed its purchase of HIT Entertainment, the owners of the Thomas TV series, which is based on books first created by the Reverend Wilbert Awdry in the 1940s and continued by his son, Christopher.

As well as the new and revamped magazines, Egmont is also launching a new collectable series of Thomas story books, based on the latest season of the long-running TV series, aimed at 1–3 year olds.

Egmont's classic Thomas Story Library series has sold over nine million copies since its launch in 2003. The company has been publishing Thomas & Friends books and magazines for over 12 years.

“The appeal of Thomas is broad," David Riley, Managing Director, Egmont Publishing Group, told inPublishing. " It has both a strong traditional heritage and a TV series loved by younger children. Through both classically illustrated and contemporary CGI titles, including our new story book range and our magazine portfolio, Egmont is confident that our publishing caters for Thomas fans of all ages.”

It's been quite a period of change for the franchise. In addition to new owner Mattel, renowned visual effects and animation studio Arc Productions was recently announced as the new animation studio for the show. It's the first global television series the studio will produce, following a series of successful films including Gnomeo and Juliet and 9.

A live action film is also in the works, to be directed by Academy Award-nominated director Shane Acker who HIT Entertainment said had signed on to transform the Island of Sodor, home to Thomas the Tank Engine, into a next generation fantasy adventure film franchise.

Acker and the film's producers have assembled an all-star creative team, comprised of Weta Workshop and Mattel's entertainment properties design team, to "re-imagine" the core characters.