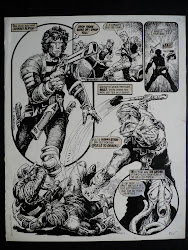 I remember seeing the cover of #61 in a stack of 2000ADs my brother -- who was a comic dealer in the 70's and 80's -- had at his home in Nottingham amidst all the Marvel imports. I flicked through it and didn't quite get it, I thought Spikes Harvey Rotten was a lead character.

Only when Starlord #1 came out and I saw the mindblowing art of Carlos Ezquerra did I start looking for everything remotely related to the creators of Strontium Dog. Lucky for me, my brother got ahold of a complete run of 2000AD up to issue 80/81... just before Starlord merged with 2000AD. I've bought it ever since.

That would have to be Johnny Alpha, with Dredd a close second. Alpha is a much more sympathetic character whereas Dredd is heroic but not quite as accessible emotionally. I think that's why he's never caught on with American readers.

But I think the essential 2000AD story is Judge Dredd: Judge Dredd Lives by Wagner and Bolland; a high watermark in the field of comics internationally, let alone in British comics.

Strontium Dog in either Journey into Hell or The Shicklegrüber Grab would be close seconds.

The innovation! New ideas and new characters all the time. I remember Brian Bolland telling me that when he was drawing Judge Death, he was thinking of the Joker from Batman. I think comics are at their best when creators channel the affection they developed for the comics of their youth into new characters and ideas.

Hopefully my love of 2000AD is evident in Elephantmen.

To keep pushing the envelope -- with new creators and new characters and new ideas. And Bolland back on Dredd -- is that too much to ask? And Halo Jones Books IV-VII. And more D.R & Quinch.

My favourite memories would have to be the Marvel UK/2000AD softball matches in Hyde Park. I led a team of Marvel editors and artists while John Wagner and Alan Grant were joined by various creators and 2000AD droids, including Brian Bolland at one point. We'd retire to the pub at Hyde Park Corner afterwards where Wagner and Grant would warn us about the dangers of work for hire. I learned a lot from both of them.

But I also had a very good experience working for the editorial team of Steve McManus and Simon Geller. Simon and then Art Editor Robin Smith gave me a lot of great feedback which undoubtedly made me a better lettering artist. They gave me plenty of time to complete the work and were always responsive and positive. I got to work on Future Shocks, Ace Trucking, Strontium Dog and Judge Dredd a few times when Tom Frame was on holiday or overloaded.

I remember watching Tom letter the back cover of The Fink Brothers 12" single, which was on a wall drawn in the art by Bolland... set at an angle. I thought to myself "F**k! I wouldn't want to do that!" At around that same time, you'd often see Steve Dillon in the office, working on Dredd at an art table, standing up... Robin told me they sometimes had to lock him in a room to make sure he finished. 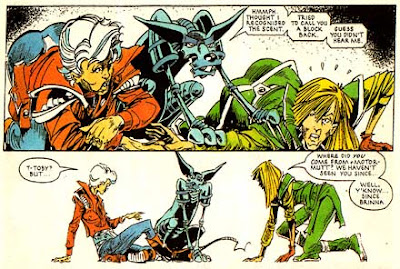 I owe a debt of gratitude to Ian Gibson for requesting me to work on Halo Jones after he saw my work on a Robo Hunter story. He told me he'd never seen someone letter his work so sensitively before -- those were the days of pen and ink when lettering was done on crackback and then cut out with a scalpel and stuck to the artwork. I would go to great pains to literally cut balloons behind figures heads or bodies, so for a short while I was Ian's letterer of choice. He wrote me a couple of thank you notes on the artwork of the last couple of pages of Halo Jones, which I cut out and kept somewhere.

Undoubtedly working on Dredd and Halo Jones stood me in good stead when Bolland asked DC if I could letter Batman: The Killing Joke for him. I sent samples of my 2000AD work to Denny O'Neill and he readily agreed. Brian was keen to work with me so he could keep the pencil pages close at hand in London. That work opened the door to comics for me in the US, so without 2000AD, I might not be the creator of my own Image comic today.

I stopped by the offices of Rebellion in Oxford last November. It felt to me as if time had stood still... although the current editorial team were working on computers, everyone was clearly working as hard as the editorial team I used to work for, and enjoying it every bit as much. They also jealously guarded their comps just as much as everyone did back in the day.

• The Strontium Dog page in this interview is from 2000AD Prog 86 by Carlos Ezquerra. Copyright Rebellion. See it online at: http://www.comicartfans.com/GalleryPiece.asp?Piece=837067&GSub=85905