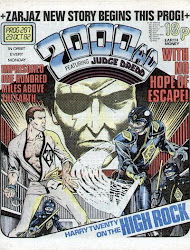 Keegan Jask book 1, a collection of implausible tales from the stellar storyteller. Written by myself with help from artist Leigh Shepeherd It will be 100 pages+ and feature an all new, somewhat improbable tale and hopefully be on sale at the Bristol comics show in May!

I wouldn't be involved with comics in any way without 2000AD .

Sitting in a tent one summer with the then obligatory huge pile of comics. Amongst them was a strange thing called 2000AD, which had a strange effect on me. It just felt so completely different to anything I'd seen before, and I wasn't quite sure how to respond. I remember it was the issue with the Princess Porkina (from Ace Garp) poster, and it all seemed so weird and ludicrous. Fantastic.

I would have similar encounters over the years with 2000AD , till I eventually got more permanently hooked with issue 454.

There are so many from the first ten years of the comic, it hardly seems plausible. Where do I start? Rogue Trooper? Halo Jones? Judge Dredd? Nemesis the Warlock? Strontium Dog? All superb.

I have a huge soft spot however for Harry Twenty on the High Rock, a strip created by the wonderful Gerry Finley Day, with a somewhat complicated history. It features wonderful art by Alan Davis, where you have that magicall moment where you get to see an artist really mastering the art form.

Harry Twenty is a classic manly anti-hero, a good natured rogue who knows the real meaning of good and evil. The story is essentially Escape from Alcatraz, in space with lots of zany ideas and characters that you'd expect from Gerry!

It may not feature on everyone's A-list list of 2000AD stories, but it's great fun. And you know, he's still out there, and hopefully no-one will ever catch up with him.  The story has been reprinted in the best of 2000AD monthly, the U.S. reprints and is currently available in a book from Rebellion.

What I always loved about it was the concentrated imagination, the fact for so many years it was ahead of everything else going on in this country or anywhere else. A genuine institution that has had a vast, but largely unsung, cultural effect on this country.

Something old by the old guard, or something impossible new and amazing. Either is always possible from the comic. But if I had to be pinned down, more Strontium Dog from Wagner and Ezquerra. Alpha Lives!