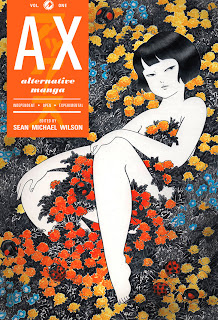 Ax: Alternate Manga edited by Sean Michael Wilson and Mitsuhiro Asakawa and published by Top Shelf Publishing, has been nominated for a Harvey Award for Best American Edition of Foreign Material.

"The Harvey Awards are one of the comic book industry's oldest and most respected awards," says Sean, who was born in Scotland but now lives in Japan and has several British titles to his credit, including A Christmas Carol for Classical Comics and Iraq: Operation Takeover, which was drawn by Lee O'Connor, as well as published work for Kodansha and NBM.

"The Harveys recognize outstanding achievements in over 20 categories," he continues. "They are the only industry awards both nominated by and selected by the full body of comic book professionals. So, it's very pleasing for us all that Ax has been selected by comic book professionals, hopefully recognising the significant step forward it is in showing the work of individual, mature style manga artists from Japan.

"Past winners in this category include Lone Wolf and Cub, Moebius, Akira and Persepolis - good company to be in!

"Just to get the nomination, from out of hundreds of possible books, is great, especially as this is a kind of democratic vote system choice, not a 'panel of judges' way. So, hopefully that should help with also getting interest in our other book plans."

Britain-based talent also up for an award includes New Zealander Roger Langridge for his work on BOOM! Studios The Muppet Show (and also for best writer, on Thor: The Mighty Avenger); Duncan Fergedo for his work on Hellboy; Frank Quitely for Best Cover Artist (for his work on Batman and Robin); and Northern Ireland's Garth Ennis for The Darkness.

• Any comic book professionals who feel like voting for Ax book for the final winner can do so on the Harvey website: http://www.harveyawards.org/The deadline for voting is 6th August 2011
Posted by John Freeman at 4:31 pm