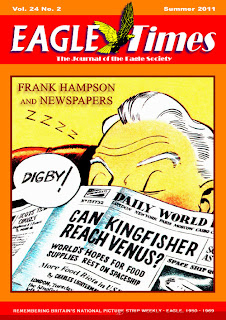 The Summer 2011 edition of Eagle Times is available now and features articles by downthetubes contributors Jeremy Briggs and Richard Sheaf.
Here's the line up:

Membership of The Eagle Society is via Annual Subscription to Eagle Times magazine, which is published four times annually. The subscription rate for 2011 is held at the 2010 rate: UK £23; Overseas £34 (in £s Sterling, please). Postal applications to: Keith Howard, 25A Station Road, Harrow Middlesex HA1 2UA United Kingdom

If you wish to pay by Paypal (to the eagle-times hotmail address below) we request an additional payment of £1. Enquiries: eagle-times@hotmail.com
Posted by John Freeman at 10:29 am