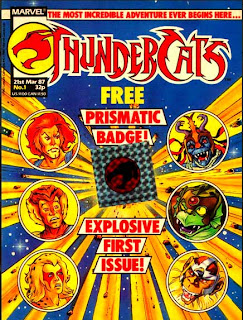 Hot on the heels of news that Disney have issued an edict that Panini UK can no longer originate Marvel superhero comic strip comes word that the company has grabbed the rights to a title where new comics are almost certain to feature - Thundercats, which will relaunch as an animated series later this year.

Thundercats has a proud history as a comic in the UK - Marvel UK published 129 issues of a regular title based on the original 1980s animated show. To date, it is the longest-running comic associated with the franchise and included work by artists such as Tim Perkins and Martin Griffiths.

Now, LicensingBiz reports that MV Sports, Rubies, Character World and Panini have all joined the programme for rejuvenated 1980s brand, which starts screening in August on Cartoon Network.

Warner Bros. announced a new ThunderCats animated series last year, produced by Japanese animation studio Studio4°C who have been in charge of recreating the series with a new, anime-influenced style. Warner said that the show would be “a sweeping tale combining swords and science and boasting ferocious battles with the highest of stakes…”

Voice actor Larry Kenney, who portrayed Lion-O in the classic ThunderCats series from the 1980s will be appearing in the new series, this time playing the role of Claudus, Lion-O’s father. The Thundercats Lair site also reports that veteran voice actor Matthew Mercer also revealed on his Twitter feed that he would be voicing Tygra. 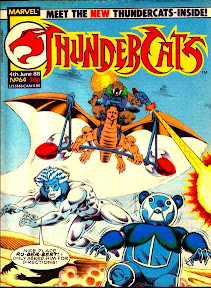 "We're all incredibly excited about the return of Thundercats and we are looking forward to reinventing though carefully respecting the heritage of this classic 80s brand," says Paul Bufton, general manager of WBCP UK. "With our licensee partnerships shaping up and amazing retailer feedback there is every reason to believe that Thundercats could return to become one of the hottest boy brands of recent times."

A Thundercats movie was announced back in 2007 but is still in development.

While the news about Disney edict on the Marvel title has disappointed many, Panini UK will still be originating boys adventure strip - so let's hope some of the hot talents they already employ on Marvel Heroes and other comics move to this new Thundercats title.
Posted by John Freeman at 1:55 pm

Very good news-though I'd still like to see them launch some characters of their own, not tied to licences.