Opinion: British Marvel is Not American Enough for Disney

For about forty years now, Marvel have had a close relationship with Britain and its comics industry, dating back originally to Odhams Press and their groundbreaking weekly comic Smash!, in which was published the first ever UK originated strip to star a Marvel character, the ever incredible Hulk. Later, rather better known to most, came the sterling efforts of Marvel UK themselves, who in the 1970’s, 80’s and early 90’s produced a huge amount of material - including Alan Moore and Alan Davis’s Captain Britain, arguably one of the most incredible pieces of sequential storytelling anyone has ever published, not to mention Stoke’s and Parkhouse’s epic Black Knight series, Death’s Head, Doctor Who, the sadly near forgotten but utterly brilliant Timesmasher and several dozen more I could mention but won’t.

In short, British originated Marvel comics are a long standing tradition which has in the past given us some of the best comics ever produced and brought some hugely talented creators into the Marvel fold.

Well, not anymore. Since Marvel UK was sold off in 1996, Panini UK (who currently hold the license to publish Marvel material in Britain) have continued to publish some UK originated material featuring the Marvel characters, including old Marvel UK stalwarts such as Captain Britain and Death’s Head. Mostly, these stories have seen print in titles aimed at younger readers, including the currently ongoing series’ Marvel Heroes and Spectacular Spider-Man.

But now, Marvel’s owners Disney have issued an edict to the effect that from now on, all material featuring Marvel characters must originate in the US.

Why they’re saying this is unclear, but the effect as far as Panini are concerned is obvious; no more UK originated material might mean no more Marvel Heroes (and, indeed, we gather the title has been cancelled) or Spectacular Spider-Man - a sad loss as those magazines currently act as a gateway into Marvel for younger readers who then move on to Panini’s reprint titles and possibly to the US originals.

Still, on the face of it, Disney’s decision makes little sense. It will deprive creators of work and Panini of revenue, which admittedly isn’t their problem (and may even be seen as a plus by them, since Panini are in competition with them in other areas), but more to the point it will deprive a section of their fan base of that way in to Marvel I mentioned, which can’t be good for business in the long run. And the only justification for it seems to be creating a uniform brand under Disney’s total control. 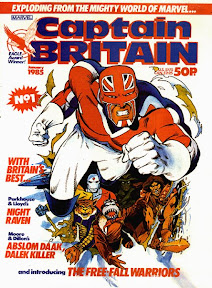 I guess compared to that typically Disney desire for homogenisation, the UK market, and indeed those other foreign markets probably also affected, are small potatoes and largely irrelevant to them. But it’s a sad day all the same, particularly for those kids who are going to lose their favourite comics, and I can’t help thinking it will ultimately just serve to further diminish an already dwindling comics industry worldwide.

Not that Disney will care about that either. After all, in the end it will be much cheaper just to close down the presses and manufacture a few more Incredible Hulk lunchboxes. And the end may not be that much longer in coming, if Disney’s current approach is anything to go by…
Posted by John Freeman at 1:46 pm

I heard about this last week, and it unexpectedly knocked me for six. I have two small boys, who have both been having Marvel Heroes and Spectacular Spider-Man for some years now. They absolutely love them; pitched as they are, at exactly the right level for eight year olds.

Neither of my kids has much interest in the titles being put out by Marvel US- if I grab a bundle from a comic shop, they go unread. Mind you, reading them I'm not surprised. Generally unclear, ugly artwork and storylines so convoluted and unsure as to their audience (kids? teenagers? long-time fans?) that the tone is all over the shop and the stories mostly unfollowable.

Panini had it exactly right- the perfect combination of stories that were just complicated enough to engage the enquiring mind (like those 60s/70s Marvel US stories were) along with puzzles and info- and colouring pages! All little kids love to colour!

I've watched my sons fall into a two foot high pile of Panini Marvels and spend a whole day in their pages, very happily.

While I'd like them to continue to enjoy comics, and enjoy the characters of the Marvel Universe- I'm certainly not going to force the US monthlies on them. So I guess Disney are going to lose some readers here. This makes me sad- but on the other hand, they absolutely deserve it.

Looks like they simply want to standardize the look and feel of the brands worldwide. This makes perfect sense in an era of multiple-media properties.

I'm not sure anything that basically shuts out a section of your established customer base can ever be said to make sense from a business point of view.

this is the sort of move we've all been expecting from the moment Disney brought Marvel. It doesn't stop it being any more bollocks though.

Frankly, as a reader of both genres of comics, the British comics had a certain creativity to them that was a little lacking in their American counterparts from the same era (compare if you will Captain Britain in the 80s to Captain America at the same time).


So this leaves what ... 2000AD as the sole British title on the market? Certainly the only one we can get (and only then if I option out naming rights for me firstborn) in my part of Oz.

2000AD the sole British title on the market? Not even close! Aside from anything else, there is always the venerable Commando...