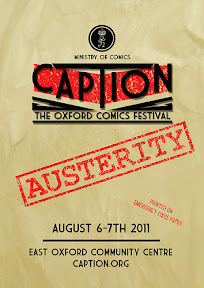 Caption, the longest running comic convention in the UK is back for 2011, celebrating small press and indie press comics.

This year's theme is Austerity, as the organisers thought this might be appropriate to the current climate in the UK. So, this could cover anything from the cheapest way to produce comics, to comics about self-sufficiency/grow your own, to revolutionary thoughts caused by austerity... however you want to interpret the theme.

As usual the event won't be having dealer/exhibitor tables, but will instead run the Caption table. This allows comic publishers to drop off your comics, they'll sell them for you for a 10% fee of anything sold, while you enjoy the rest of the con... or just sit in the bar!

More news on guests, workshops & panels will be added to the event's facebook page as they confirm items.

Attendance fee is £5 a day (to be confirmed), or you can volunteer to be a gopher during the weekend for free entry.