Along with a host of special events and Expo exclusives, including a huge 2000AD panel featuring the likes of Patrick Goddard, Gordon Rennie and Sean Phillips, a preview of the new Alan Moore: Storyteller book by Gary Spencer Milidge, a special STRIP Magazine launch promotion with John Freeman, Jim Campbell, Jim Alexander and Jasper Bark - and much more - it's now confirmed that Sydney Jordan, the creator of the great Daily Express newspaper strip Jeff Hawke, will again be at the event in May.
"Last year's Bristol International Comic Expo was a great success for the Jeff Hawke Club and we're coming back this year," says the club's organiser, Will Rudling. 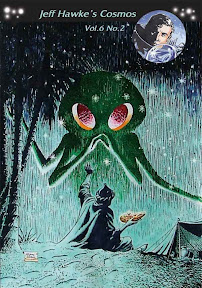 Sydney Jordan will be on hand to talk about Hawke and his other comics work along with Will Rudling,  Editor and Founder of the Jeff Hawke Club, and master model maker Chris Tubb.

Jeff Hawke original artwork will be on sale.
The Club has almost completed reprinting all the early Jeff Hawke stories in its magazine, Cosmos, and is beginning to shift its emphasis on his transformation into Lance McLane/ Jeff Hawke.
"We will be reprinting the Earthspace strips and subsequent stories in sequence," says Will. "The scenario is of a post-apocalyptic Earth struggling to survive and is very timely. Jeff and his android companion, Fortuna encounter fantastic adventures and deal with environmental issues.
"This shows Sydney’s unique interpretation on the subject and the amazing plots he creates. It’s incredible how relevant they are now and so prophetic, they were since written 35 years ago!"
• For more about the Bristol International Comic Expo go to www.fantasyevents.org/bristolcomicexpo/index.html
• Jeff Hawke's Cosmos is on sale by subscription, which costs £20 per year for three issues. Subscriptions can be sent to The Jeff Hawke Club, 6 The Close, Alwoodley, Leeds LS17 7RD, United Kingdom. Web: www.jeffhawkeclub.com