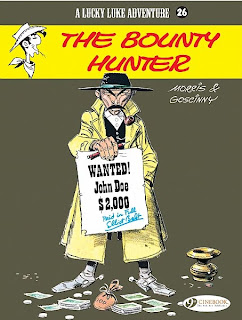 The Lucky Luke titles from Cinebook come thick and fast, one every two months and, while I don't review them all, how could I pass up The Bounty Hunter when it has Lee Van Cleef on the cover?

Bounty hunters are the lowest of the low, apparently willing to do virtually anything to get paid for bringing in their quarry and the most successful bounty hunter of them all is Elliot Belt. Lucky Luke is doing the job of a bounty hunter in Cheyenne Pass without accepting the bounty in return which, of course, means that he remains whiter than white. The two men separately set out to hunt down a missing thorough-bred horse called His Highness which the owner believes was stolen by the Indian Wet Blanket who he is offering an enormous bounty for the capture of. Elliot Belt can only see the dollar signs of the bounty for Wet Blanket whilst Lucky Luke is more interested in finding the horse to see if the Indian is really guilty of the crime. 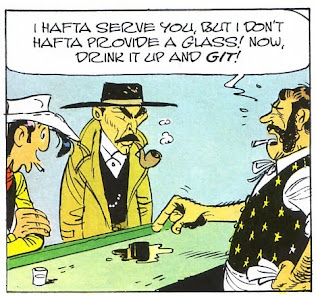 Guest starring Lee Van Cleef portraying Angel Eyes, the "Bad" from The Good, The Bad And The Ugly, as the conniving Elliot Belt, The Bounty Hunter unsurprisingly sets Lucky Luke up as the "Good", specifically in this case the Lone Ranger. The movie themes continue with the Indian medicine man and his trainee sporting Universal movie style Frankenstein's monster masks for no apparently good reason other than it is funny - and the book is funny.

Just as importantly though the book fleshes out its characters and it does it much more than I would have expected. Rene Goscinny's plot ranges around between the town, the reservation and the horse ranch, but it focuses on a fairly small set of characters allowing the reader to discover quite a lot about them from the trainee medicine man who does not really apply himself, to the Indian chief more interested in selling Custer souvenirs to the palefaces, to the horse ranch owner who is obsessed with horses to the point of his wife leaving him over it. But the star of the book is definitely Elliot Belt who is given almost two complete pages of back story to explain just how he became a bounty hunter and what lead him to where is is today. 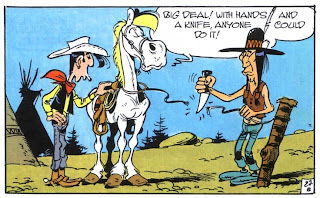 Morris' art is a delight the whole way through from the horse ranch house with its saddle shaped stools to the reactions of the bar patrons and the dancing girls as the Indians march in demanding firewater. In a book that is so themed around horses, he even has Luke's horse Jolly Jumper rather haughtily giving Snowy-like asides to the reader. It all works so well.

I tend to prefer story driven adventure books to humour titles, whoever publishes them. A humour book has to be very good for me to rave about it so let me just say this - if you haven't tried a Lucky Luke book yet then The Bounty Hunter would be a very good place to begin.

• There are more details of the Lucky Luke books on Cinebook's newly redesigned web site: www.cinebook.co.uk

• There are more details on Lucky Luke on the official Lucky Luke website (in French).
Posted by Jeremy Briggs at 8:36 pm