In Review: The Bluecoats - The Greenhorn 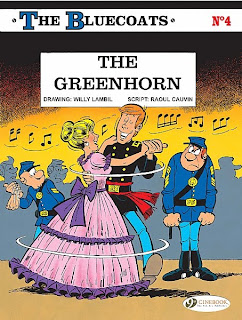 Cinebook takes us back to the fun of the old West with purdy laydies, saloon brawls and dangerous injuns, not this time in the regular company of Lucky Luke but in their less regular American civil war series The Bluecoats. The Greenhorn, written by Raoul Cauvin and illustrated by Willy Lambil, translates the 14th of Les Tuniques Bleues albums, Le Blanc-bec, into English for the first time.

Originally published in 1978 over 16 issues of Spirou magazine beginning in number 2080 and first collected in album form in 1979, The Greenhorn tells the story of a new, young and very green Lieutenant in the Union forces who has just arrived at Fort Bow. Also arriving at the fort are the enthusiastic Sergeant Chesterfield and the reluctant Corporal Blutch, the Bluecoats main characters, in time for Sgt Chesterfield to totally get the wrong end of the stick regarding the new Lieutenant's intentions towards Chesterfield's not-quite-girlfriend Emily. This all gets out of hand very quickly culminating in the Lieutenant shooting the son of the local Indian chief and him being sent with the Sergent and Blutch to the Civil War front to get him away from the Indians while the Fort's commander tries to calm things down. 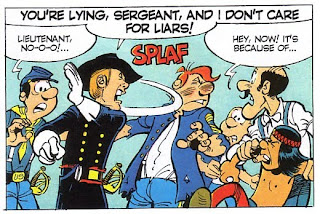 Cauvin's script races along from the Fort to the saloon to the Indians to the civil war and back again and it is all very entertaining while Lambil certainly didn't have an easy time with the script considering the large number of characters seemingly in every panel but his art is more than up to the task.

Last time when I was reviewing a Bluecoats book, The Skyriders, I found the combination of humour and war not really to my liking but there is much less of it here. While in this book a major plot point is the Lieutenant shooting an unarmed Indian child in the back, it is done off panel and the horrified reaction of all the other characters to the event gives it a different impact to the killings in the previous book plus it emphasises the inexperience of the character. This book has sparked my interest in this series in a way that the previous didn't and while the next Bluecoats book is Rumberley, it would be good to see Duel Dans La Manche, with its European and English Channel setting, translated at some point.

Part western, part rom-com, part civil war, The Greenhorn doesn't sound like it should work but it does and for those readers who enjoy the Lucky Luke books then The Bluecoats may well be another series worth trying.

• There are more details of the English language editions of The Bluecoats on the Cinebook website.

• There are more details of the original Dupuis editions on Les Tuniques Bleues website (in French).
Posted by Jeremy Briggs at 7:00 am