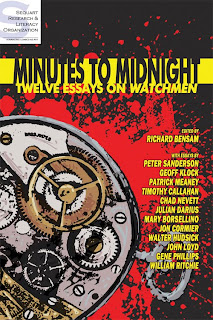 Sequart Research and Literacy Organization's Minutes to Midnight: Twelve Essays on Watchmen is now available for order through comic shops (use Diamond order code AUG101288). The book, edited by Richard Bensam, is currently listed in the books section of August's Previews catalogue (page 344) and is set to hit stores in late October.

• Reassembling the Components in the Correct Sequence: Why You Shouldn't Read Watchmen First, by Walter Hudsick

• Bringing Light to the World: Watchmen from Hiroshima to Manhattan, by Peter Sanderson

• The End Is Nigh: The Limits of Watchmen, by Geoff Klock

• The Smartest Man in the Morgue: Watchmen and "Twelve Notes on the Mystery Story," by Chad Nevett

• Somebody Has to Save the World: Captain Metropolis and Role Playing Watchmen, by Tim Callahan

• Some Different Sort of Time: Watchmen as Cinema, by Patrick Meaney

• At Play Amidst the Strangeness and Charm: Watchmen and the Philosophy of Science, by William Ritchie

• How the Ghost of You Clings: Watchmen and Music, by Mary Borsellino

• Nothing Ever Ends: Structural Symmetries in Watchmen, by Jon Cormie

Sequart feel no Watchmen fan or comics scholar should go without this critical analysis of the greatest graphic novel of all time. Orders should be placed with your comic shop before the end of August.

• Minutes to Midnight: Twelve Essays on Watchmen: use Diamond order code AUG101288 in Previews
Posted by John Freeman at 7:50 am

I just spent this past weekend going through a friend's copy of the "Absolute" collection. Reading Moore's original proposal and seeing early notes from Gibbons- that was the best part (along with recoloring work from the incomparable Higgins). But this...I had heard nothing about. Sounds right up my alley!