In Review: The Chimpanzee Complex - Civilisation 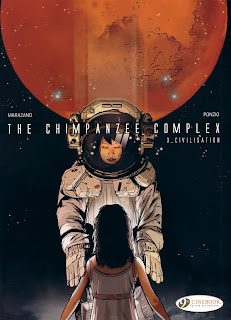 The Chimpanzee Complex has been something of a revelation since it began three books ago. Near future, hardcore science fiction with a mature storyline, Cinebook chose to publish the title in the full European size rather than the American size that they use for the majority of their mature titles. This gave the highly detailed artwork the room that it needed and the reactions of both the comics reviewers and the readers to the series seem to have been overwhelmingly positive. Indeed The Chimpanzee Complex even received an Eagle Award nomination for Favourite European Comicbook. Civilisation is the third and final book in the ongoing story and it concludes the story of astronaut Helen Freeman.

Since this is an ongoing story split over three books, you cannot begin anywhere else but with the first book and then read forward. The first book took Freeman and her crew to the Moon while the second book took them to Mars and it ended with the crew entering suspended animation as their ship left the Solar System. 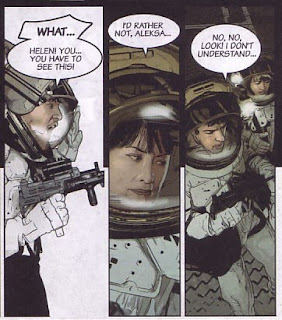 Civilisation begins with Helen waking up to discover that her ship is now docked with an unknown and enormous ship. Not knowing where and just as importantly when they are, Helen and Alexsa enter the apparently deserted ship knowing that they have little air left to breathe on their own and that they have nothing to loose by investigating the other ship.

At the end of the downthetubes review of the second book, Sons Of Ares, I said that writer Richard Marazano seemed to be setting off into 2001: A Space Odyssey territory and he does, after a quick detour via Alien's derelict spaceship. Where and when they are becomes obvious to the astronauts as the plot unfolds and, like 2001, the story comes full circle without explaining all the complexities of how it managed it. Also like 2001, it doesn't need to explain everything to leave you impressed. Having reached the end, I will now take the time to reread the entire series again without the gaps of months between the books - it really is that good. 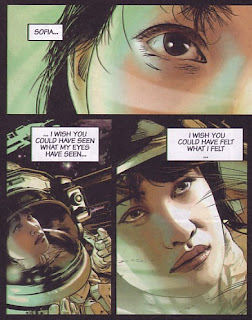 Jean-Michel Ponzio's art remains at the high standard of the previous two books - accurate, realistic and above all believable. Indeed the visual reveal on page 32 of the book left me flicking back to the beginning to figure out just how he as the artist managed not to give this important plot point away in all his pages worth of establishing shots.

The two creators are working on another series together called Genetiks which is on its second book. While at 100+ pages each these are longer than the typical Cinebook publication, we can but hope that the reaction to this series is enough for Cinebook to consider translating Genetiks into English. In the meantime if you haven't begun The Chimpanzee Complex then do so - Civilisation is an impressive conclusion to an impressive series.

There are more details of The Chimpanzee Complex on the Cinebook website.

There are more details of the original French editions (in French) on the Dargaud website.

The downthetubes review of book one, Paradox, is here and of book two, The Sons Of Ares, is here.
Posted by Jeremy Briggs at 7:01 am

I have to say that I really enjoyed all three of these albums. The story they craft is one complete article, at times almost cinematic through its art style, and a really compelling read throughout. It was the first work I picked up from Cinebook, after seeing their panel at BICS last year. It certainly has inspired me to start picking up a few other titles from their catalogue.