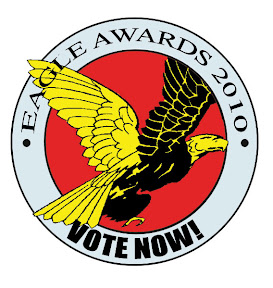 After two years of nomadic existence, the Eagle Awards will take up residency at London’s hugely popular MCM Expo at Excel, where the 2010 awards will be announced.

As of 2011 and going forward, the awards will become part of London MCM Expo's May event.

While details are still to be finalised, Eagles administrator Cassandra Conroy announced, “I’m really pleased to have inked the deal with MCM's Paul Miley and Brian Cooney, considering that the London MCM Expo is viewed by fans and industry alike as London's Comic Con the nearest that the UK has to the San Diego ComicCon!"

“It’s been frustrating to have been homeless for the past couple of years and this new arrangement provides the Eagles with long-term stability," she added. "It also links us into a partnership with people who are as enthusiastic as I am to make them the industry’s premier awards."

For his part, MCM Expo's Paul Miley said, “We are very happy to now be the new home to the Eagle Awards which we consider to be a great British institution and an important part of comic fandom recognised the world over. I am looking forward to working with Cassandra and the Eagle's to help take the awards to another level.

“London MCM Expo has a tremendous following from both comic fans and the public as a whole and is supported by many artists and writers which has helped the Comic Village section of the show to grow show on show,” added Miley.

“We are likened to San Diego Comic Con in the US all the time by fans and industry pundits which we admit is a great accolade -- maybe not yet in size but most definitely in stature. So bringing the Eagles to Expo helps to cement our position as London's Comic Con the Eagles are our Eisners.”
Posted by John Freeman at 1:13 pm