In Review: Scared To Death - Malevolence and Mandrake 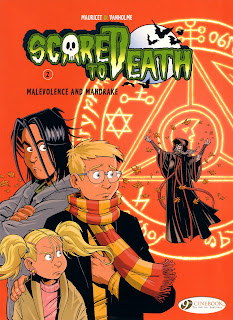 Horror comics for children have had an awkward time of it in the past so full marks to Cinebook being brave enough to translate the Belgian series Mort De Trouille into English for the first time. Written by Virginie Vanholme and illustrated by Mauricet, the Scared To Death series tell the stories of schoolboys Robin and Max and their encounters with the supernatural. Malevolence and Mandrake was originally published in 2003 as Maléfice Et Mandragore, the third in the Franco-Belgian album series which ran for five albums plus a shorter story

Robin and Max's schoolfriend Thomas has gone missing while a new Romanian girl, Emma, has joined their class. Emma appears rather taken with Max which makes Robin's little sister Sophie, who has a crush on Max, follow her home to discover more about her. There she discovers that young Emma is actually an ancient witch called Malevolence who has captured Thomas and now Max to use them to regain her youth and that of her sister Mandrake. Unsurprisingly Robin doesn't believe his sister's story and she sets out to prove it to him. 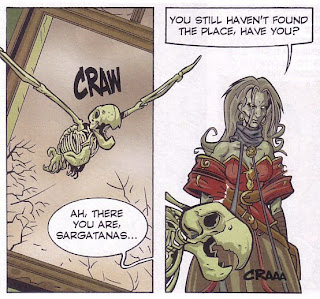 This is a horror story for the Harry Potter generation even down to Robin wearing a Hogwarts scarf on the front cover - but this is not a bad thing. Vanholme's script is aimed squarely at children and although it does have enough going on to maintain an adult's interest, it is with Mauricet's artwork that the book really shines. He uses a clear and slightly humourous style which suites the script perfectly and his characters are well defined, with his witches in particular being beautifully ugly. 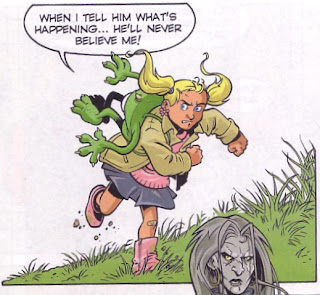 I particularly like his take on the determined Sophie with her pink boots, blond pony tails, Monsters Inc backpack and a sticking plaster on her knee. It is in the details of the artwork that perhaps help it stand out for an adult reader since Mauricet adds so many pop culture references as in-jokes. Here we have a book that includes art references to both Marvel and DC superheroes, to the aforementioned Harry Potter and Monsters Inc, as well as other Pixar films, Star Wars and even Spirou comic, a title that Mauricet himself has worked on. The script does not call for the vast majority of them, but they are there anyway.

Scared To Death - Malevolence and Mandrake is a good choice of a book for the younger members of the family but it is also worth having a read of yourself before you pass it on to them just to enjoy Mauricet's artwork.

• There are more details of the Scared To Death series on the Cinebook website.

• There are more details of the Mort De Trouille series on La Bedetheque website (in French).

• Mauricet's English language website is here and his slightly more adult blog is here in which, while it is in French, he tends to let the artwork speak for itself.
Posted by Jeremy Briggs at 7:00 am