Working 9 to 5 - Superheroes for hire is Markosia's latest adventure 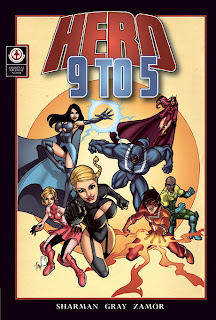 British publisher Markosia's new comic Hero 9-5, written by Ian Sharman with art from David Gray focuses on a world where being a super hero is just another job.

A world where only the rich can afford the comprehensive hero protection policies that ensure that the best heroes will come to their aid in an emergency. The poor, however, have to make-do with protection from government sponsored agencies with limited resources whose staff are…shall we say… a little less heroic.

Jacob Reilly, aka Flame-O, is just one such hero, an everyday guy who just happens to be able to shoot flames from his hands. He didn’t want to be a super hero, he wanted to be a musician, but he wasn’t good enough to make a living at it. So he ended up getting a job at “Heroes For Zeros,” a government sponsored hero agency. So, Jacob clocks on, works nine to five (unless he’s short on cash and does overtime or, worse, a night shift) and fights z-list villains for a pathetic pay cheque.

Despite being a super hero, Jacob has all the problems of regular folk – an irritating boss, bills to pay, professional jealousy, and also certain problems that are unique to his profession…like the fact that his girlfriend is also his alter-ego’s nemesis, Frostica (and she’s insanely jealous of his teenaged sidekick, Pink Girl).

Ian is perhaps best known as Managing Editor of Orang Utan Comics, and the writer of Alpha Gods and has been working professionally in comics for several years now. His professional inking credits include the Contraband OGN from Slave Labour; work on the Eagle Award nominated antholgy Eleventh Hour from Orang Utan Comics Studio and AAM/Markosia; and work on Marvel's UK comics, Spectacular Spider-Man and Marvel Heroes, published by Panini.
• Available in the UK via specialist comic shops, you can find it in Diamond's August Previews catalogue under publisher AAM/Markosia, where the Diamond order code is - AUG10 0726

• All of Markosia's publications are or will be available from their Markosia Store. You can purchase everything that the company has released, including special editions, signed copies, variants, and merchandise.
Posted by John Freeman at 11:11 am