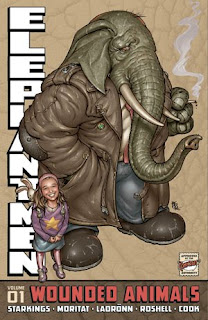 The sold out first volume of Richard Starkings ace comic Elephantmen is back in print. With a cover from ace 2000AD artist Boo Cook (who's just been interviewed by downthetubes contributor Matt Badham here), it now includes the sold out Zero issue by with art by Ladronn, as well as an all-new sketchbook section, the 'English & Media Studies' backmatter from the single issues.
This new collection also features an all-new introduction by Jonathan Ross, writer of Turf and contributor to Titan Magazines Clint magazine. (We also hear he works in TV and radio, but we won't hold that against him).