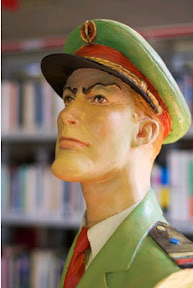 (with thanks to Lizzie Bennett, last updated 28/7/10): Variety, Dark Horizons and other web sites are reporting this morning that Warner Bros. Pictures has closed the deal for its film version of Dan Dare starring Sam Worthington (Avatar, Clash of the Titans).

The new film will reportedly be based on the Garth Ennis-Gary Erskine mini-series published by Virgin rather than the original and much-loved original 1950s series from Eagle.

Given the Warner Bros. involvement, downthetubes wondered if a new Dan Dare comic may be on the cards, perhaps produced by DC Comics, but the Dan Dare Corporation tell us: "DC comics have absolutely nothing to do with the Eagle or Dan Dare or any deal."

Rumours of this latest attempt to bring Dan Dare to the big screen first surfaced back in March, but the Dan Dare Corporation has been trying to get a movie version of the 1950s Eagle hero going for a number of years.

Back in 2005, the DDC indicated their aim was to feature live actors superimposed over computer generated backgrounds. Coincidentally perhaps, this is the technique that ATV planned for their aborted 1980 Dan Dare television series, electronically keying actors over a drawn comic strip background, and which has perhaps been used most successfully on the big screen for films such as the 2004 SF feature Sky Captain and the World of Tomorrow, which was shot digitally in just one studio against a blue screen. (see our previous news story)

While Dan Dare has never been a popular character in the US his adventures were widely republished in Europe and Australia. New adventures of the original Dan Dare feature in the comic magazine Spaceship Away, while the latest revamp - there have been several - was published by Virgin, written by Garth Ennis and drawn by Gary Erskine.

It is reported that the new film will be based on this version, which attracted its own fans but did not sell huge numbers.

Dan Dare Corporation owner Colin Frewin is attached to executive produce the film, along with Dan Lin. (Frewin oversaw the enjoyable 22-episode animated version of Dan Dare: Pilot of the Future released in 2002.