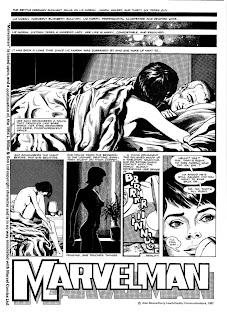 British comics guru Dez Skinn is running an auction for a rare piece of Marvelman art by Garry Leach.

On offer is Marvelman Episode 3, page 1 (which first appeared in Warrior Issue 3).

"As an experiment, partially because of resenting the massive percentage eBay takes and partially because it's on behalf of a friend, this will be a public auction done through my Wall on Facebook, along with Paypal for the winner," says Dez. "Once in Facebook, enter "Dez Skinn" to view.

The auction is now open and will finish on August 8th at 10.00pm (British Summer Time).

"It's an experimental use of Facebook Events, so apologies in advance if you encounter any difficulties finding it," says Dez. "If you don't wish to join Facebook, email me directly for progress reports [via Dezskinn1ATyahoo.co.uk] and bidding information. Updates to all interested parties who ask for such will be sent out every few days."

Thanks for that John. Folk can dispense with the need for Facebook (ah, if only we could) as it's now being held direct on my website's forum, with the link you gave. Now if only I still had some of those old pages m'self...