In Review: Classics from the Comics 172 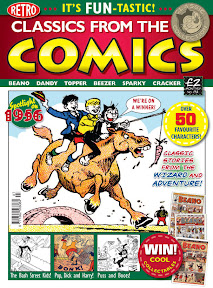 There's the usual great mix of strips from a variety of DC Thomson humour comics in the latest issue of Classics from the Comics, on sale in all good newsagents now.

Favourites this time around have to be a 1977 episode of Spoofer McGraw, a teller of tall tales who regularly befuddled his duffel-coated mate in Sparky, sometimes, I recall in response to readers letters. Sparky was always one of my favourite DCT titles (although I was never very keen on Puss and Boots, who also feature this issue) and as Spoofer comes up with an absurd explanation for the arrival of a large cement mixer on his street, it's hard not to see why.

Humour is always in the eye of the beholder but there's plenty of fun to be had this issue, with two simple but effective 'sight gag' strips starring Mickey the Monkey from Topper; Little Plum taking up weightlifting, only to discover it's not all it's cracked up to be; a brilliant 21-frame Desperate Dan page by Dudley D. Watkins (21 frames! How often do you get that on one page today?) from 1956; a really bizarre Pansy Potter as she takes on, and betters, a weird-looking spiv character selling springs (springs? why?!); and a great Figaro! strip from 1962, from Topper, that pretty much rounds the whole jam-packed issue off.

There are also a couple of adventure strips - Space Kids by Ron Smith from Beezer, General Jumbo from Buddy, and older material too, from Adventure and the origial Wizard (although I'm not so sure these text stories are as good as the selected comic strips. They sit a bit uneasily with the rest of the comic, I think).

Once again, it's a fine mix and there's plenty for fans of The Beano and sadly now long-gone DCT comics to enjoy. I do hope though, that we'll see a return of creator credits, which was beginning to creep into the title but seems to have been dropped this time around. Other than that, £2 well spent, in my view!

I also liked the Mickey the monkey on the back cover..

Horse Pills given to the kids as sweets by Desperate Dan..you couldn't make it up!!!:))

Yep, of the two Mickey's, that's the better one.

I also noticed a few hints of corporal punishment for mischief this issue. It must be hard to find episodes of early Minnie the Minx and Dennis that didn't end with a slipper...

"21 frames! How often do you get that on one page today?"