The DFC Will Rise Again 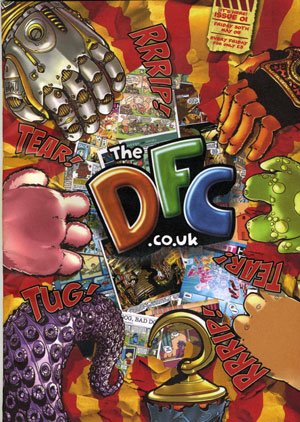 (With thanks to John Anderson of Soaring Penguin): The acclaimed but sadly short-lived weekly comic The DFC will return, says publisher David Fickling - possibly as soon as next year.

(due for release in September), David Fickling spoke enthusiastically about his comic project, which was published by Random House and accepted some of the criticisms made about the title, including concerns the content had been too wide ranging for the target audience.

When he started The DFC, David explained he had a three-year plan that had had the approval of Random House, that included newstand distribution and a more international circulation. He started with a subscription base because it was the easiest to control with minimal resources. He accepts that this was probably a mistake, one that he won't make again.

David indicated that it was only when the economic climate turned bad that Random House's parent company pulled the plug on The DFC. However, he has plans to revive the title in the latter part of 2011, but only if he has sufficient funds that he can do it properly. This would include positive sales of the DFC-related books and includes the sale of the last of the DFC stock still available.

Several collections of the comics origianlly published in The DFC are now available, including Good Dog, Bad Dog

and Monkey Nuts among them - out later this year.

Responding to a general concern from some comic creators that the content of The DFC was too broad, in that some of it was for children and some of it was more suited to young teenagers, David said that choice was a conscious decision, as he wanted a title that appealed to a broader range of readers.

However, he accepts that this might have been detrimental, and in the revision, he said he would be narrowing the scope of the stories.

In a broader sense, David also noted that he needed The DFC to succeed so that it wouldn't be used as a precedent for any other company being approached to start a weekly title. On a more personal level, he wants The DFC to succeed because he has such pride and enthusiasm for it.

The event gave David another chance to praise not only his creators, but also longtime British comics fan Paul Gravett who had initially introduced him to a number of creators. It also provided a great opportunity to promote the new books Morris the Mankiest Monster and Vern and Lettuce.

• For more on comics and books by John, who's also publisher of the magazine From the Tomb, visit www.soaringpenguin.co.uk
Posted by John Freeman at 10:27 am