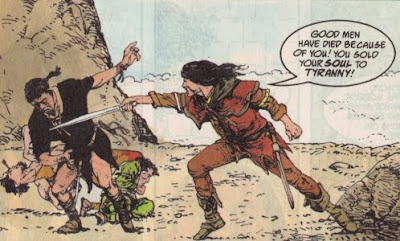 Does the sporadically torrential rain of the last few days mean that's all the summer we're going to get? I hope not.

Onto the Tube Surf...

• Arthur Ranson sends word that Daniel Clifford, a fan of the artist's Mazeworld strip (produced in collaboration with writer Alan Grant), has set up a Facebook petition to get the strip re-published.

Arthur has written about Daniel's efforts over at his blog. "I, of course, believe a collection of the entire Mazeworld in one fat edition would be a nice thing to have," he notes, "but the reason this petition thing excites me is the thought of a social network of fans using their connection to create an outcome.

"Coincidentally in Saturday’s Guardian Review section there was a review of Cognitive Surplus: Creativity and Generosity in a Connected Age by Clay Shirkey whose suggestion is that the brainpower wasted with passive entertainment watching might be used via the internet to organise and do something in concert. Shirkey quotes examples of charities that have been set up. A Mazeworld reprint doesn’t have that significance but hey, we can be shallow too."

If you want to check out some pages from Mazeworld, you can do so at Arthur Ranson's website.

• Meanwhile, in Manchester, there are two events with British comic connections happening at the Lass O'Gowrie pub over the weekend as part of their epic Lass fest event.

The first, The Hammer House of Dezza, kicks off on Saturday at 3.00pm. It features veteran British comics editor Dez Skinn, who will be talking about his time at the helm of Hammer House of Horror Magazine, which included in its pages comic strips.

The second is on Sunday. It's Vworp 3, a one-day Doctor Who convention that numbers among its guests the aforementioned Dez Skinn and comic artist Adrian Salmon, alongside the likes of Doctor Who writers Terrance Dicks, Andrew Cartmel, Rob Shearman and actress Sophie Aldred, who played companion Ace alongside Seventh Doctor Sylvester McCoy.

• Speaking of events, there's lots forthcoming from the folks at Alternative Press (who describe themselves as "...a group of artists, comix creators, writers and poets dedicated to encouraging creativity through self-publishing").

The group has lots of exciting news, available via the above link, of fairs and exhibitions, including the Alternative Press Fair in November, Tunbridge Wells Zine Fest in August and much, much more.

Hang on, if I'm mentioning events, surely I've got to talk about Caption... I know John's plugged it recently, but it's well worth a reminder. Oxford's annual convention celebrates all things comics, but primarily the small press, with the theme of 'Mad Science' this year.

It looks like it's going to be another cracking event, with guests such as Melinda Gebbie, Jeremy Day, Al Davison and Darryl Cunningham all attending. I'll be along too as a punter and I can't wait!

This Tube Surf has been a bit verbose. Let's go for some quick hits:

• Rob Jackson makes ice cream and comics, and his blog is always worth a look.

• Dan McDaid goes all 'TV Action' for a pal, with a page of art homaging Doctor Who as he appeared in the 1970s comic Countdown. Oh yes!

And on that sad note, it's goodbye until my next Tube Surf...
Posted by Matt Badham at 10:26 am