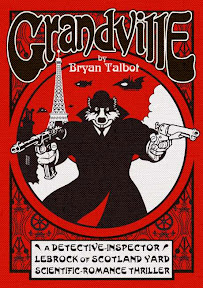 has been shortlisted for a Sheffield Children's Book Award in the awards new graphic novel category, one of five titles topping a list of favourite comics based on the votes of hundreds of school children across the city.

UK Publisher SelfMadeHero has also made the shortlist, for its Manga Shakespeare: Twelfth Night

The final shortlist of five books was decided upon using a wide range of factors and each participating secondary school in Sheffield was sent a full set to distribute to the students/judges and to gather in their reviews and ratings.

The shortlist is as follows:

• Captain America: The Man With No Face

by Carmine Di Giandomenico and Greg Pak
Published by Marvel

The new graphic novel award is to be named after Spider-Man creator Stan Lee.

"I'm obviously very please to be nominated," Bryan Talbot told downthetubes on learning of the nomination. "I always thought of Grandville as an adult book though. Perhaps it encroaches into the "Young Adult" range.

"They must be keen on steampunk badgers with guns in Sheffield!"

Run by the Sheffield School Library Service, the Sheffield Children’s Book Award began in 1988 and was first started to encourage children and young people to read and also to highlight the very best children’s books published each year. In the first year just six local schools took part, but this number has grown every year to a total of 152 schools in 2007.

Each school chooses a book category for the class and they are given a start up pack of ideas along with a collection of books to read and review. Each child is asked to vote for their favourite book and these votes are then collated over the summer.

Results are kept a closely guarded secret until the Award Ceremony.

Children involved in the project are invited to the Award Ceremony along with all Shortlisted Authors, Illustrators and representatives from the Publishing Houses.

The last two weeks of the summer term will see all the individual votes going to the award organisers and the final winner will be announced at the ceremony at Sheffield City Hall in November - and if Grandville wins, that would tie in nicely with the launch of its sequel, Grandville Mon Amour

, due for release on 4th November.

• More about the Sheffield Children's Book Awards at: www.sheffieldchildrensbookawards.co.uk

Shakespeare as Manga... interesting and very effective! Good to know!

Pragmatic Mom
Type A Parenting for the Modern World

http://PragmaticMom.com
I blog on children's lit, education and parenting