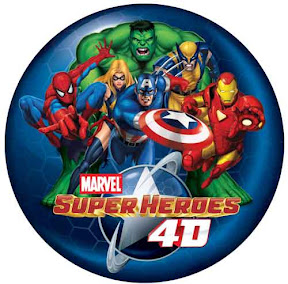 Two of the world's leading entertainment brands - Madame Tussauds, part of the Merlin Entertainments Group, and Marvel Entertainment - have joined forces to create a unique new visitor experience at the leading London attraction, scheduled to open in early summer 2010.

Marvel Super Heroes 4D, due to open next month, will feature a mix of 4D animation, interactive themed areas and startlingly realistic Madame Tussauds wax figures over three floors of the attraction.

From the moment you enter a lovingly-created S.H.I.E.L.D (Supreme Headquarters International Espionage Law-enforcement Division) HQ, you'll be immersed in the Marvel superhero world. Hulk’s gigantic legs can be seen standing astride a massive plinth, his torso disappearing through a gaping hole in the ceiling, the green-skinned behemoth free from his Gamma Chamber, triggering warning lights and emergency alarms.

Next stop is The Hall of Heroes, for some close up and interactive Super Hero action: a very angry Hulk bursts up through the floor with muscles rippling across his huge chest, face contorted in rage. There, you'll be able to measure up to his outsized vital statistics, stand inside his huge outstretched hand and even “turn Hulk” yourself courtesy of a special interactive that will make you appear very, very big and very, very green. Nearby, showing off his amazing arachnid powers, is Spider-Man and a cleverly inverted office scene means you can literally “hang out” with him on the ceiling.

The figure of Wolverine (as portrayed by Hugh Jackman) shows off his awesome foot long Adamantium claws to full effect and you can try them out for size with some special replica versions. No stranger to danger, The Invisible Woman can melt away into the ether and an ingenious graphic effect will allow fans to become semi transparent as you stand alongside her figure (as portrayed by Jessica Alba). You can also find out much more about the featured Super Heroes via graphic light boxes and interactive displays.

Linking the Hall of Heroes to the final level is the Heroes Gallery – a futuristic gallery space with Super Hero artwork and a mutant mirror wall that will show some very alternative images.

Also on display is the Super Hero Test Area, full of high tech equipment, where you'll find Iron Man and S.H.I.E.L.D boss, Nick Fury (as portrayed by Samuel L Jackson), keeping a watchful eye on proceedings as you prepare to enter the final phase of their Super Hero adventure – the Marvel Super Hero 4D auditorium.

The climax of the experience is a new 360º nine minute animated 4D cinema attraction, complete with high impact special effects. Screened in Madame Tussauds famous domed auditorium, the story unites a crack team of Super Heroes including Hulk, Spider-Man, Wolverine, and Iron Man in a battle against one of Marvel’s most villainous baddies in an all new adventure set in the UK.

The Super Heroes arrive in London to receive special bravery awards from the Queen only to find The Capital under threat from evil genius, Doctor Doom. The deadly Doctor is intent on destroying the Super Heroes and their secret command centre and has created an army of lethal robotic accomplices to help him.

Utilising the entire 70 metre circumference of the dome, Marvels Super Heroes 4D unites amazingly realistic 3D animation with state of the art digi-star projection and then adds in an extra-sensory fourth dimension. The action will spill out of the screen over the audience and thrill-enhancing special effects - from water and smoke to tremors beneath the feet - will touch every sense, drawing you right into the heart of the adventure. As the story unfolds the London skyline is vividly brought to life and you will literally feel the impact of the villain’s invasion and the force of the Super Heroes’ strength as they do battle.

The film has been created by one of the world leaders in CGI feature films and 4D attractions, Threshold Animation Studios, working in close collaboration with Marvel. The figures and themed experience have been brought to life by Madame Tussauds’ creative team and unrivalled sculptors.